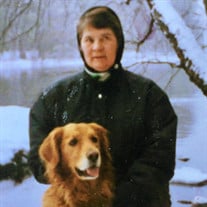 Arlene Marie Mannetter, 81, Green Bay, passed away Tuesday, July 30th at her home. She was full of life and vigor up until the day of her passing. Born February 3, 1938 in New York, she was the daughter of Walter and Ruth Hoffmann. Her parents relocated to Wisconsin when she was a child. She attended Waukesha High School, and during that time, she worked as a volunteer candy striper at a local hospital. As a teenager, she met the love of her life, Neil. They were married January 12th 1957, and they made their home in Wisconsin for 40 years. They often spent time camping and enjoying the wilderness in Phillips, WI. Arlene was a devoted wife and mother and worked as a cook at several locations throughout the years. She loved nature and taking walks with Neil and their loyal dog and companion, Symon along the Wisconsin River. Arlene was a free thinker and one of her favorite mottos was, “Color outside of the lines.” During her life, Arlene enjoyed yoga as well as learning about alternative health and wellness. She enjoyed playing songs by ear on the piano and played for the San Luis nursing facility residents. It made her happy when she saw them recognize songs and relate to the music. She had a love for animals, enjoyed knitting, gardening, playing cards, reading, classic black and white films, and most of all, engaging in conversation and laughing. She loved her yellow bird of 15 years, Bill E. Boy. She cared deeply for her family and friends, and was an avid letter writer. Arlene is survived by her children, Dr. Terrence A. Mannetter, Afton, MN, Dr. Drew A. Mannetter (Sara) , Superior, WI and Lonni Jo Morris, Green Bay, Wi; her brother Dale R. Hoffmann (Texas) and five beautiful grandchildren; Mia, August, Trenton, Caitlin and Veda. She was preceded in death by her husband, Neil A. Mannetter. To honor her wishes, a private memorial is being held Saturday August 3rd in Green Bay, WI.

Arlene Marie Mannetter, 81, Green Bay, passed away Tuesday, July 30th at her home. She was full of life and vigor up until the day of her passing. Born February 3, 1938 in New York, she was the daughter of Walter and Ruth Hoffmann. Her parents... View Obituary & Service Information

The family of Arlene Marie Mannetter created this Life Tributes page to make it easy to share your memories.

Send flowers to the Mannetter family.