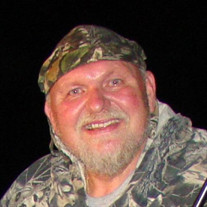 William R. Wiesner Jr, 69, better known as ‘Bearcrazy Bill’, died peacefully at home surrounded by family and friends following health complications. He was born to William and Sharon (Getzloff) Wiesner. Bill graduated from Sturgeon Bay High School in 1969. His nickname in his high school years was ‘Hammer’. On Dec. 30, 1969, he joined and proudly served in the United States Marine Corps as a field radio operator receiving the National Defense Service Medal. On March 3, 1971, Bill was honorably discharged due to a service-related injury. On October 28, 1972 he married Sandra K. Ebel and celebrated almost 48 years of marriage with Sandy. The most important thing to Bill was sharing time with his family and friends. He had an outgoing, friendly personality and touched a lot of people’s lives. Bill was a member of the Tanum Forest Evangelical Lutheran Church and so enjoyed the fellowship after mass with the church members. Bill “Bear Crazy” Wiesner is one of the most revered bow hunters/designers in the United States. As an expert bow hunter, teacher, author and industry leader, Bill has been recognized by the industry and sought after to design and sell his bows. Bill loved the outdoors and achieved many bowhunting accomplishments for over 30 years. Some of his accomplishments included being recognized by Field & Stream magazine in 2000, with the honor of receiving the bow design BEST of the BEST AWARD, one year after starting Renegade Archery; Accomplished outdoor writer with articles published in all bowhunting/outdoor magazines. Publications Bill had written for included, Field & Stream, Bear Hunting Magazine, Bowhunter Magazine, Bow & Arrow Magazine, Archery World, Whitetails Unlimited, Wisconsin Bowhunters, Wisconsin Outdoor News, Badger Sportsman & Traditional Bowhunter. Bill was an accomplished bow design engineer, revolutionizing sports archery. Companies he started, exclusively using his personal bow designs included: Renegade Archery, Orion Archery & Evotek. He authored 2 books: Traditional Archery; The Aggressive Approach and The Bear Hunting Obsession of a Driven Man. He also produced 6 award winning videos: A Man Called Bearcrazy, Traditional Archery – The Aggressive Approach, Bruin Up a Storm, Bowhunting A Family Tradition, The Bear Hunting Obsession of the Wiesner Family & Full Boar. He was a noted national seminar speaker. Seminars included everything from The Right Bow for You, Archery Safety, Bow Selection, Bow Hunting to Bear Hunting. Bill enjoyed being a Hunter Education Instructor and was also a Bow Hunting and Safety Instructor at Ted Nugent’s Kamp for Kids, countless 4H clubs and Youth Archery organizations. He was the first in a class of 8 bowhunters to be certified in Wisconsin under the International Bowhunter Education foundation. He was honored and privileged to have Ted Nugent, Blake Shelton and Brett Favre shoot his bows. Ted and Bill became life-long friends and shared many hunts together. Bill is survived by his wife, Sandy, sons Brad (Melissa) and Bryan (Nicole), 3 grandchildren, Tia, Keagan, Ryder, his mother, Sharon, brothers Paul (Jeanne), Mike (Julie) and a sister Mary (Dave). He was preceded in death by his father, William Wiesner Sr, paternal grandparents Roy and Edna Wiesner and maternal grandparents John and Donna Getzloff. Bill will be sadly missed by his family and friends and will remain in our hearts forever. A Life Celebration will be held for Bearcrazy Bill at a later date.

The family of William R. Wiesner created this Life Tributes page to make it easy to share your memories.

Send flowers to the Wiesner family.