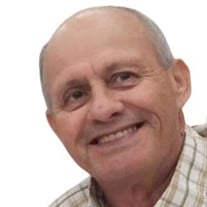 William Gabriel Cody Sr. Green Bay, Wisconsin July 27, 1955 - May 1, 2021 William passed away unexpectedly on Saturday May 1, 2021 in his home at the age of 65. He was born on July 27,1955 in Escanaba, Michigan to George L. Cody Sr. and Yvonne Y. Cody. He graduated in the class of 1986 with his GED from Escanaba High school in Escanaba, Michigan. He then attended Bay De Noc Community College for diesel-heavy equipment. He went on in life to be a man of many trades. He was a businessman, worked at U.P. office supply in Escanaba, Michigan along with many others. William was a member at Bridge Point Church in Green Bay, Wisconsin. He loved his church family and wished he could have attended more. There is nothing more that William loved than his family. Spending time with his grandchildren was his favorite thing to do. He loved tinkering with things especially out in the garage, taking walks and feeding the geese at the wildlife sanctuary in Green Bay, Wisconsin he also enjoyed fishing, camping, cooking, building with wood, bald eagles, and watching old westerns. William was a very loved soul with a funny sense of humor that always made you laugh. He was very strong willed but would go to extreme lengths for someone that was in need. He genuinely loved everyone and always believed in forgiveness and second chances. He will forever be missed and loved but never forgotten. He is survived by his four sons William(Amy) Cody, Robert Cody, George(Lynnette) Cody, John(Elizabeth) Cody. His sisters Teresa Moss, Diane Nordquist, Jeanette Lawson. His brothers John(Donna) Cody, Melvin(Gayle) Cody, Niel Cody. As well as numerous nieces, nephews, grandchildren, and one great grandchild due in September. He is preceded in death by: His father George L. Cody, his mother Yvonne Y. Cody, His brothers Charles Nordquist, Ronald Cody, George L. Cody Jr.(Sonny), David Vandenberg, Ronald Vandenberg. A memorial service will be held for William on May 29, 2021 at 11 a.m. at Bridge Point Church located at 2421 W Point Rd, Green Bay, Wisconsin 54304. In lieu of flowers memorial donations can be sent to Bridge Point Church Attn: Cody Family. The family of William Cody wishes to thank Bridge Point Church, Pastor John Nehs, Simply Cremation of Green Bay, WI, and Malcore Funeral Home.

The family of William Gabriel Cody Sr. created this Life Tributes page to make it easy to share your memories.

Send flowers to the Cody family.