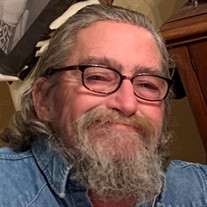 On January 26, 2022, Wes “Shoe” Schumaker left this earth, his body worn out but his spirit still strong. He will be sadly and deeply missed by those who loved him, his wife, Cathy Huntowski (who he married on August 15, 1997), his two sons, JD and Justin, son and daughter by marriage, Stasch Huntowski (Karen) and Kasha Huntowski (Justin Thie), grandchildren, Samson, Aiden, Keira, and Steven Huntowski, his sister, Debbie Weber (Bill Schumacher), his nieces and nephews, Samantha, Jackie, Stephani, Jacob and Ricki, his cousin Larry, and his Uncle Sherman and Aunt Sharon. Wes was an old school biker who didn’t really care what brand of motorcycle he rode as long as his “knees were in the breeze”. He favored his stroked-out Harley Super Glide for the sheer thrill of hearing it roar down the road – twisting the throttle going under an overpass just to hear it rap. Yes, it had straight pipes, and yes, the neighbors hated it when he got home late but the sheer joy it brought him couldn’t be denied. He was a man of many talents. He had an Associate Degree in Horticulture and was part of the team that designed and installed the gardens at the EAA Museum in Oshkosh. He installed terrazzo floors around the Midwest including at the Milwaukee Public Museum. He worked in the oil pipe fields in Houston, Texas and started his own remodeling business there. When he moved to Green Bay he started his own construction business - The Job Jar Guy - specializing in remodeling and lead paint remediation and was acknowledged as one of the best in the business by many of his government, public and private clients. He will be remembered as a no-nonsense, hard-headed guy with a sly, quirky sense of humor who preferred to act rather than just talking. “Do something, even if it’s wrong” was his favorite saying. He was always available if his mechanical or construction skills were needed by friends or family. He loved his grandchildren and rarely missed one of their school or church events and was proud of their accomplishments. He loved and respected his step-children and he often bragged them up to his friends and family. He and his loving wife were constantly living their best life together and supporting each other through highs and lows. He had a hard, rough life but he took joy in simple things like dancing, riding, making recycled metal garden sculptures, and collecting motorcycle models and kitschy ceramic planters. He was a big fan of books by Louis Lamoure and was perfectly happy listening to country music or watching old Westerns if he couldn’t go riding. There will be a “Celebration of Life” held on Saturday, February 5th at the Malcore West Funeral Home beginning at 11:00 am, a short memorial service at 12:30 pm, with a lunch to follow.

The family of Wes "Shoe" Schumaker created this Life Tributes page to make it easy to share your memories.

Send flowers to the Schumaker family.