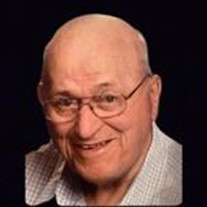 Wayne Evan Borseth “Waino” “Hush” a long time resident of Bessemer and Bergland, MI passed away on Wednesday, October 14, 2020 in DePere. He passed away with his family by his side after celebrating his 95th birthday on Monday. Wayne was born in Bergland, Michigan on October 12, 1925 to Ralph and Cecil Borseth. He graduated from Bergland high school in 1943 in the “Top 10” of his class. He served his country as a Second Lieutenant in the United States Army from 1943-1946. He was married to Mary Lulich in 1947 and celebrated 72 years of marriage before Mary's passing in July 2019. Wayne was an active member of our Redeemer Lutheran church in Bessemer and Trinity Lutheran church in Bergland as well as the Bergland American Legion 562. Wayne worked at the White Pine mine, Weidmann and Edward Hines lumber before running his own businesses in Ironwood Michigan. Some of those businesses he owned or was part owner of were Ironwood Lumber, Bighorn lumber in Laramie Wyoming, VE Ahonen Lumber in Marquette, Land O Lakes Lumber, Sugar Camp Lumber, Superior American Homes, Three Lakes Distributing and NEY incorporated that built the existing Antonio's restaurant in Bergland. He also built a development north of Bergland on Mary Lane named after his wife. Wayne enjoyed his cottage at Lake Gogebic, a central gathering point for family and friends, where lots of laughs and memories were made. Whether it was roasting a pig, playing cribbage, enjoying a cold beer with tomato juice or drinking a “brandy Man” Waino was always up for a good time. He always followed his children and grandchildren's sporting events and was the #2 fan of his son Kevin's women's basketball teams. Waino enjoyed reading and was considered by his family as a walking encyclopedia, a human calculator and a hlstorical wizard. Whether it was history from the civil war or the Bergland area, Waino was on top of it. He enjoyed talking on the phone and His famous “Hello now” greeting will be forever missed. He dedicated his life to his family and took pride and caring for his wife Mary, children and grandchildren. Wayne is survived by his 4 children Joy (Bob) Young, Croswell, MI; Mark (Lisa) Wausau, WI; Kevin (Connie) DePere, WI; Becky, Woodstock, GA; 12 grandchildren, 17 great-grandchildren 1 grand dog and several nieces and nephews. He was preceded in death by his parents, his brothers Ralph and Kale and his wife Mary. Wayne’s family would like to thank the staff at Allouez Parkside Village for their compassionate care. Memorial services will be held Friday October 23 at Trinity Lutheran Church in Bergland at 11:00 am EST. with the burial to follow at the Bergland cemetery alongside Mary. Due to COVID no luncheon will be served. Condolences may be sent to: Borseth 1144 Palomino Ct. DePere, Wi. 54114

The family of Wayne Borseth created this Life Tributes page to make it easy to share your memories.

Send flowers to the Borseth family.