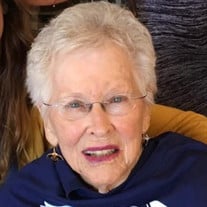 Vivian Lucille Stewart, 100, died on May 10, 2019 at Unity Hospice in DePere WI. She was born in Homestead WI on September 25, 1918 to Frederick and Selma Bergendorf. She graduated from Iron Mountain High School in 1936 and then moved to Green Bay to attend business college. She worked in an office for several years. In 1939, she met Rodney Stewart at a YWCA dance. They married on June 21, 1941 and raised their family of four children in Allouez. In addition to being a full-time wife and mother, Vivian was actively involved with many organizations. She was a board member at the YWCA, secretary of the Bellin Hospital Auxiliary, and a member of the Heritage Hill Guild. In 1950, Vivian and Rod became members of Union Congregational United Church of Christ. Vivian served on many church boards over the past 69 years. She taught Sunday School, was a member of the Women’s Fellowship, and was chairman of Priscilla Circle for many years. Vivian was also a Girl Scout leader and a charter member of Chapter CM of the PEO Sisterhood. She served as secretary of Vasa, the Swedish heritage organization. She was an avid reader, and a Scrabble champion. Her membership at the YMCA was very important to her, faithfully attending an exercise class and swimming three days a week. This continued well into her 90s. For the past four years, she made her home at the Bellevue Retirement Community in an independent apartment. A major change, but Vivian embraced her new lifestyle and loved living there. Vivian was preceded in death by her husband Rod, sister Ebba and brothers Ellwood, Alfred and Bruce. Vivian is survived by her daughter Diane and husband Peter, daughter Linda and husband Jeff, daughter Sara and husband Wayne, and son Bruce and wife Jen. She is also survived by eight grandchildren, Sarah Jean, Stewart, Joshua, Adam, Abigail, Gretchen, Dane and Molly, as well as nine great-grandchildren and loving nieces and nephews. In lieu of flowers, memorials made be made in Vivian’s name to the Ecumenical Partnership for Housing or the PEO Sisterhood. A celebration of Vivian’s life will be held on Sunday, May 19, 2019 at Union Congregational Church, 716 S. Madison Street, Green Bay WI. The family will greet friends and relatives from 2:00 p.m. until the time of the service at 3:00 p.m.

Vivian Lucille Stewart, 100, died on May 10, 2019 at Unity Hospice in DePere WI. She was born in Homestead WI on September 25, 1918 to Frederick and Selma Bergendorf. She graduated from Iron Mountain High School in 1936 and then moved to Green... View Obituary & Service Information

The family of Vivian Lucille Stewart created this Life Tributes page to make it easy to share your memories.

Send flowers to the Stewart family.