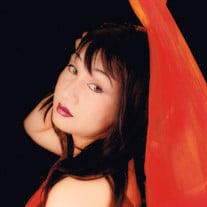 Tuyet Nhung Nguyen (Hart), 58, Ashwaubenon, passed away peacefully early Monday morning, January 20, 2020, while surrounded by her loving family. Born in Saigon, Vietnam on December 8, 1961, she is the daughter of Thanh Ha Thi Le and the late Phuoc Minh Lam (who was one of the personal bodyguards for the President of South Vietnam). Tuyet escaped to Malaysia from communist Vietnam at the age of 17. Unfortunately, her brother was killed during his own escape attempt from Vietnam. Tuyet was sent to California as her port of entry into the US from the Camp in Malaysia that she was in, from there she went to Reading, PA where she had an Aunt. It is here that she met Robert Hart. The couple relocated to Ohio in 2002 to be near Robert’s parents and both began work with EMG, Inc. While in Ohio, the couple wed on December 21, 2002. They then re-located through their employer to Ashwaubenon, WI. Beginning in 2006, Tuyet sponsored a number of families from Vietnam and worked tirelessly as their advocate. Shortly after Tuyet made her way to the United States, Tuyet’s dad also made his way to the States and found great comfort being near Tuyet and her family. Phuoc Minh Lam was living as a US Citizen with the family during his final days and both he and the family found great comfort in being together at the time of his passing. Tuyet is survived by her loving husband and best friend, Robert Hart; two children, Christopher Nguyen and Shaina Chau; three step-children, Robert Hart, Jr., Daniel Hart, and Renee Hart; nine grandchildren, Trinity, Vera, and Enzo Nguyen, Kendrick Wilson, Dorian and Darien Davis, Raelyn Alana Meyer, Steven Nicholas Hart and Daniel Alan Hart, Jr.; her mother, Thanh Ha Thi Le; three sisters, Tuyet Trinh Lam, Tuyet Van Lam, and Tuyet Thanh Lam; two step brothers, Tuan Le and Vu Le; one step-sister, Thu Le; and a large extended family and many more special friends. A gathering and visitation will be held at Malcore West Funeral Home, 1530 West Mason Street, Green Bay on Saturday, January 25, 2020, from 4:00pm until the time of the funeral service. Funeral service, 7:00pm Saturday at the funeral home with family friend, Pastor Steve Graham conducting the service. Simply Cremation of Green Bay is coordinating and overseeing the service details.

Tuyet Nhung Nguyen (Hart), 58, Ashwaubenon, passed away peacefully early Monday morning, January 20, 2020, while surrounded by her loving family. Born in Saigon, Vietnam on December 8, 1961, she is the daughter of Thanh Ha Thi Le and the late... View Obituary & Service Information

The family of Tuyet Nhung Nguyen-Hart created this Life Tributes page to make it easy to share your memories.

Send flowers to the Nguyen-Hart family.