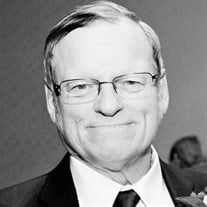 Timothy "Tim" Sellen was called home to be with his Lord and Savior peacefully on February 4, 2020 at the age of 70. Tim was born on January 9, 1950 in Oconto Falls, WI to the late Carl Sellen and Elna (Brander) Patz. He was raised on the family farm and graduated from Lena High School in 1968. He was drafted into the Army in October 1970 and was stationed in Germany until he was honorably discharged in August 1972. He was introduced to the love of his life, Cheryl, through their respective pastors in January 1979 and they were married on August 18, 1979. He was a dairy farmer in Lena, WI for several years until moving to Gillett, WI in 1984 to run a bakery. He moved to Green Bay in 1986 and worked as a baker until his retirement. Tim was a loving husband, father and grandfather and always enjoyed spending time with his family. He loved getting a laugh out of people, especially with his quirky and peculiar ways. He proudly claimed that “God gave me the gift of not being embarrassed to make an idiot of myself”. He had an impressive ability to remember dates and events and had a passion for recycling. His family and friends will forever cherish the countless stories and memories of him that will always make them laugh. Tim was an active and faithful member of Community Bible Church in Lena, WI and served on the board for many years. One of his favorite things was to attend church to participate in “fellowship with saints of like precious faith.” He was always willing to lend a helping hand to anyone in need especially if it meant he had the opportunity to share the gospel with them. Tim is survived by his wife of 40 years, Cheryl; 6 children, Carl (Laura), Michael, Cindy (Nick) Enderby, Rachal (Justin) Fossum, Jennifer (Everett) Olson and Angie; eight grandchildren with one on the way, Brian, Marissa, Aarilyn, Ezra, Carter, Maya, Clayton and Parker; 6 siblings, Roger (Rose), Carol (Paul) Nielson, Albert (Shirley), Lois Aukofer, William (Kathy) and Marianne (Robert) Gauthier; and many cousins, nieces, nephews, other relatives and friends.  He is preceded in death by his parents; brother, Donald; Sister Sharon Hershey; and brothers in law William Aukofer and Don Hershey. Visitation will be held at Community Bible Church, 7560 Old 141 Road Lena, WI 54139 on Saturday, February 8 from 10-11:00am with a service to immediately follow. Please send any cards/flowers to Community Bible Church at the address listed above. A GoFundMe campaign has been started to assist the family with medical and funeral expenses. https://www.gofundme.com/f/timothy-sellen-memorial-fund The family would like to thank the staff at St. Vincent Hospital, Aurora Hospital as well as DaVita and Unity Hospice, for their exceptional kindness and care.

Timothy "Tim" Sellen was called home to be with his Lord and Savior peacefully on February 4, 2020 at the age of 70. Tim was born on January 9, 1950 in Oconto Falls, WI to the late Carl Sellen and Elna (Brander) Patz. He was raised on the... View Obituary & Service Information

The family of Timothy "Tim" Sellen created this Life Tributes page to make it easy to share your memories.

Timothy &quot;Tim&quot; Sellen&#160;was called home to be with his Lord and...

Send flowers to the Sellen family.