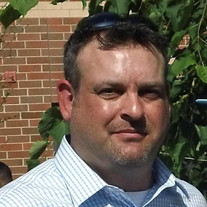 Thomas ‘Tom’ Driscoll, 51, passed away peacefully on July 1, 2021, after a courageous battle with Cancer since January 2020. The son of Patrick and Patricia (Stika) Driscoll was born on November 18, 1969 in Green Bay, WI. Tom attended Preble High School and then continued his education at NWTC for Mechanical Design and Engineering. Tom worked at Therma Tron-X in Sturgeon Bay, WI for 8 years. He enjoyed golfing, curling, watching football, barbequing, spending time with his family. Tom is survived by his children, Kaitlyn Driscoll (Ben Symes) of Howard, Sean Driscoll of Mississippi, and Erin Driscoll of Manitowoc, and most importantly his best- four-legged friend, “Bruce”. He was further supported by his parents, Pat and Patty Driscoll, sister Kathy (Dan) Merrill, brother Tim Driscoll, and nieces and nephews Moira, Finnegan, Sullivan, Serenity, and Jasmine along with many other relatives and friends. Tom was preceded in death by his grandparents Melvin and Regina Stika, Charles and Marge Driscoll, and Aunt Kathy Dettman. Friends and family are invited to Tom’s celebration of life on Sunday July 11th, 2021. The family will be hosting a pig roast from 4-8pm at Tic’s Harbor Lights (2824 Harbor Lights Lane, Suamico WI 54173). In lieu of other expressions of sympathy, memorials may be given in Tom's memory for the benefit of Unity Hospice. A special thank you to all his caregivers at Bellin Hospital, his general surgeon team through the whole process, Dr. Coorough and his nurse, Nicole, along with Urologist, Dr. Tahsildar, and nurse practitioner, Janie. Another special thank you to Unity Hospice for their extraordinary hospice care and support. The family would also like to thank his co-workers at Therma Tron-Ex for their continued support over the last year and a half.

The family of Thomas "Tom" Driscoll created this Life Tributes page to make it easy to share your memories.

Send flowers to the Driscoll family.