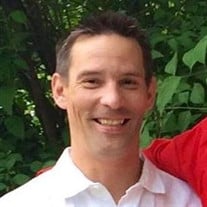 Tom Austin, 43, died in his home on Saturday September 21st, 2019, after succumbing to chronic health issues. Tom was born in Carson City, NV to Robert A. Austin, Sr. and the late Cheryl Jean (Brown-Austin) Payne on January 5, 1976. He joined brothers Robert and Michael Austin at that time, and was greeted by his younger brother Rickie the following year. The family lived in various locations “out west” until relocating to Marinette, WI around 1990. Tom graduated from Marinette High School in 1994. It was there that he met lifelong friends and his future wife, Kelli (Richer) Austin. Tom and Kelli moved to Green Bay, WI in 1997. 1998 brought the birth of Tom’s son, Joshua Thomas. Fatherhood suited him, and Josh was the greatest joy in his life, until Cecelia Ann came three years later. There was enough joy for both kids, with Tom taking a year off of work to be a stay at home dad with Cece. Tom worked numerous jobs over his years in Green Bay, always choosing positions that allowed him to be involved with his family. He was an exceptionally successful football coach, from Josh’s flag football days through middle school tackle. Many friendships were made and lives touched by “Coach Tom”. He coached YMCA basketball, as well as soccer, for both of his children. He was a proud homeowner and handyman, enjoying home improvement projects, especially those that involved woodworking. In addition to this, he had a passion for working out and fitness, which included competing and advancing in Tough Man competitions, roller blading, boxing, and good old fashioned in-home work outs. Tom is survived and celebrated by his two children, Josh and Cece, granddaughter Josephine (Josh) Nelson, as well as his brothers Robert and Michael Austin, niece Cheryl (Zach) Hein and great nieces Emma and Alice. Additionally, he is remembered by his uncle Gordon (Nonda) Brown and by close family friends Chris and Kim Kempf and Kevin Boucher and family. Lastly, he is remembered fondly by Kelli (Richer) Austin and family. Tom was preceded in death by both sets of grandparents, his uncle Mike Brown, his step father Bob Payne, his mother Cheryl Payne and brother Rick Austin. A special recognition goes out to the men and women who work locally in public service (police, EMS, hospital staff). Their efforts are not often recognized or appreciated, especially by those who need them most. You are invaluable. A private service will be held by Tom’s children at a later date, with funeral arrangements gracefully handled by the staff at Simply Cremation. Thank you to all who’ve offered support and condolences. The knowledge that so many loved Tom and his family has brought comfort and peace at a difficult time.

Tom Austin, 43, died in his home on Saturday September 21st, 2019, after succumbing to chronic health issues. Tom was born in Carson City, NV to Robert A. Austin, Sr. and the late Cheryl Jean (Brown-Austin) Payne on January 5, 1976. He joined... View Obituary & Service Information

The family of Thomas "Tom" Austin created this Life Tributes page to make it easy to share your memories.

Send flowers to the Austin family.