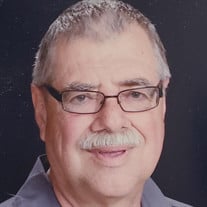 Thomas “Tom” A. Pagel, 74, of Abrams, passed away into heaven on Thursday, August 19, 2021 at Bellin Hospital with his family by his side. He was born May 18, 1947 in Oconto Falls to the late Donald and Gloria (Osweiler) Pagel. He was united in marriage to his high school sweetheart Linda Valley on February 4, 1967 in Oconto Falls. Tom graduated from Oconto Falls High School and went on to continue his education at UW-Madison where he received a Bachelor’s Degree in Pharmacy. He did all this while working two jobs and raising his young family. Tom worked at Snyder Drug, Beaumont Pharmacy, Cub Pharmacy, Pamida, and then the Oconto Falls Pharmacy where he retired after a 40 year career as a Pharmacist. Tom and Linda have been long time members at Ss Edward and Isidore Parish in Suamico. They also were a part of several biker groups, first being the Wildfire Forever Riders and later Doc’s Harley Group Wolf River Chapter. Tom had many enjoyments in his life, ranging in many aspects. He loved live music, spending time outdoors, hunting, fishing, and riding his motorcycles. He treasured spending time with his nine brothers and sisters and their families, especially up nort’ at the Pagel Spike Camp (where the deer are few but the memories are plenty). He also in his younger years loved playing basketball and sharing stories of his pastime. Through his years academically, Tom always shot for the moon. He always ranked high and was a part of the honor society all the way through. His family would describe him as larger than life - he was always there when needed and even when he wasn’t. His greatest moments were spent with his family watching not only his two sons grow, but also his grandchildren. Some of Tom’s favorite sayings were “agree to disagree” and “never turn down an opportunity for an adventure.” He truly lived that life. When asked “I have fun when…” Tom answered “I have fun pretty much in everything I do”. And he did. He was the guy who became friends with everybody, everywhere. Every campground, rally, workplace, hunting camp, chili cook-off, restaurant, elevator, neighborhood… he was a friend to all. Left to cherish Tom’s memory are his wife, Linda; sons, Jeffrey (Debbie) Pagel of Hobart and Andy (Sandy) Pagel of Abrams; grandchildren, Morgan, Lauren, Tyler, Samantha and Mikayla Pagel; his siblings, Gerald (Suzanne) Warzon, Larry (Becky) Pagel, Billy (Cathy) Pagel, Jerry (Gloria) Bigelow, David (Gale) Pagel, Paul (Beverly) DeWolfe, Doug (Kara) Meyers, Curt (Lisa) Lotter and Keith Pagel. He is further survived by numerous nieces, nephews, other relatives and friends. A memorial mass will be held for Tom at 3:00 p.m. on Thursday, September 2, 2021 at St. Edward & Isidore Parish (3667 Flintville Rd Suamico, WI). Fr. David Hoffman will be the officiant. Visitation will be held at the church from 1:00 p.m. until the time of the service. Tom will be laid to rest in the Woodlawn Cemetery in Oconto Falls. Tom's funeral will be live streamed at https://www.facebook.com/Ss-Edward-Isidore-Church-562136803967841. The family would like to send a special thank you to the staff at Bellin ICU, DaVita Dialysis and Dr. Robert Mead for all the care and support they gave Tom.--

The family of Thomas Allen Pagel created this Life Tributes page to make it easy to share your memories.

Send flowers to the Pagel family.