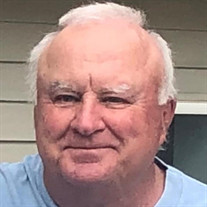 Thomas F. Lemerond, 73, Green Bay, passed away unexpectedly on Wednesday, December 15, 2021, at a local hospital. He was born November 21, 1948, in Green Bay, son of the late Earl and Louise (Schultz) Lemerond. Tom graduated from Abbot Pennings High School, and proudly served his country in the United States Army as a helicopter pilot in Vietnam in the 101st Airborne Division (“Screaming Eagles”). He had a lifelong love affair with aviation, visiting the US Air Force Museum in Dayton, OH, numerous times. His love of all things mechanical extended from "souping up" cars in his youth to a long career as an engineer for the Green Bay & Western Railroad. He loved recounting stories from his days as a “rail”. Tom was an avid golfer. For the last 25 years, you could find him out at Hilly Haven with his pals. Although he pretended not to care, he always knew the score. He secretly relished "tuning up" his buddies, which was more often than not. Tom was known for his sense of humor. He was quick with a joke and had a unique gift for leaving smiles on the faces of all he encountered. At the same time, he was always generous to anyone who needed a helping hand. He was the neighbor who snow plowed the entire block after a snowstorm with a wave and a smile. He will be deeply missed by his wife, Carol, and family members including his son, Andy Lemerond, of Green Bay; daughters, Holly Verdeyen and Juliet Lemerond of Chicago; his wife Carol’s children, daughter Debbie Spencer and sons Greg and Jim Francisco; his sons and daughter-in-law Steve Spencer, Diane Francisco, and Dan Verdeyen; he and Carol’s combined seven grandchildren, as well as a host of other loving relatives, friends, neighbors, and great grand children. He is survived by his sisters, Patricia Smits and Kathy Surber of De Pere, WI. In addition to his parents, Tom was preceded in death by his sister Mary Jo Herlik and his brother Gerald Lemerond. A private service will be followed by an ‘all-are-welcome’ celebratory happy hour in Tom’s honor on Saturday, December 18th from 4:00-6:00 PM at the clubhouse at Hilly Haven Golf Course, 5911 CTH-PP, De Pere, WI.

The family of Thomas F. Lemerond created this Life Tributes page to make it easy to share your memories.