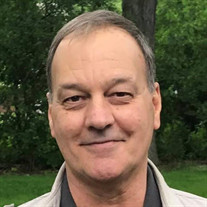 Thomas J. Cotts, 67, Green Bay, passed away at a local hospice care facility following a 6 month battle with cancer. Born March 14, 1954, in Green Bay, he is the son of the late Russell and Doris Cotts. After graduating from Abbott Pennings High School in 1972, he attended UW Madison where he received his Bachelor’s Degree. Tom wed Mary Jo Hamilton shortly after graduating college and together started a family before going in separate directions. Tom had worked for many years in the roofing industry as an estimator and bidding out projects. Later in life, Tom became the caregiver to his dad. This ushered in Tom’s new endeavor of caring for the elderly in their homes. He was an avid Green Bay Packer fan and loved to follow current events and politics. Tom is survived by his daughter and son-in-law, Colleen and Ryan Schmitt of New Berlin, WI; his son, Christopher Cotts of Plymouth, MN; two precious grandchildren, Gianna and Weston Cotts; two sisters and brothers-in-law, Amy and John Schmidt of Peach Tree City, GA and Susan and Richard Dodge of Chicago, IL; further survived by nieces, nephews, other relatives and friends. He was preceded in death by his parents; former wife and mother of his children, Mary Jo Owens; and one brother, John Cotts. Simply Cremation, Green Bay is serving the family. There will be a memorial gathering at Malcore (West) Funeral Home, 1530 West Mason Street, from 2-3pm on Wednesday, May 19, 2021 followed by a memorial service at 3pm. Tom's memorial service will be live streamed via Zoom. The login information is as follows: ID:9042544061 Password:Daniel Tom’s family extends a special thank you to the entire caring staff of Unity Hospice for the care provided to Tom both in his home and later at the Unity Hospice care facility.

Thomas J. Cotts, 67, Green Bay, passed away at a local hospice care facility following a 6 month battle with cancer. Born March 14, 1954, in Green Bay, he is the son of the late Russell and Doris Cotts. After graduating from Abbott Pennings... View Obituary & Service Information

The family of Thomas J. Cotts created this Life Tributes page to make it easy to share your memories.

Send flowers to the Cotts family.