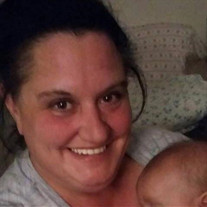 Theresa Marie Kulis (Marvin), 53, of Green Bay, Wisconsin passed away unexpectedly on February 6, 2020 in Rhinelander, Wisconsin. Theresa was born on September 18, 1966 in Minneapolis, Minnesota to George and Sandra Marvin. She was their first daughter. Theresa grew up in Rhinelander and attended Rhinelander High School with the graduating class of 1984. She then started a family with the birth of her daughter, Sandi. She worked in customer service and also found joy in caring for the elderly. Theresa was proud of her place on the local pool league and was very good! She loved God, her family and friends, and having a simple life. Later, she was married to Daniel Kulis and they were blessed with their son, Jacob. Two years later, Dan passed away from cancer, leaving Theresa a widow. There was nothing more important to Theresa than her children and she found happiness in being a stay-at-home mom and homemaker. Theresa was a religious woman and her husband's passing combined with her faith inspired her poetry. Being a published author of 3 poetry books was one of her greatest accomplishments. She is preceded in death by her parents; George G Marvin and Sandra M Sandberg, her husband; Daniel C Kulis, and her sister; Carrie S Marvin. She is survived by her children; Sandi M Marvin and Jacob D Kulis, niece; Samantha J Olson, grandchildren; Gracie, Carter, and Jack, and great-nephew; Harrison. A celebration of life will be held at the Days Inn (Claridge) Hotel at 70 N. Stevens St, Rhinelander, WI on Sunday, March 15, 2020 from 1:00 p.m. to 4:00 p.m. A GoFundMe page has been set up in order to help Sandi and Jacob with the funeral services. You can add your donation at www.gofundme/f/theresakulis

Theresa Marie Kulis (Marvin), 53, of Green Bay, Wisconsin passed away unexpectedly on February 6, 2020 in Rhinelander, Wisconsin. Theresa was born on September 18, 1966 in Minneapolis, Minnesota to George and Sandra Marvin. She was their first... View Obituary & Service Information

The family of Theresa Marie Kulis created this Life Tributes page to make it easy to share your memories.

Send flowers to the Kulis family.