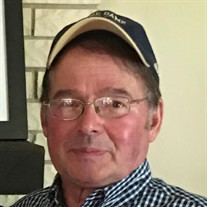 Stephen (Steve) Bruce Voelker, 71, passed away on Friday February 28th 2020 at his home near Stangleville, in the town of Franklin. Steve was born in Waterloo Iowa on August 4th 1948 and moved to Green Bay where he graduated from Green Bay East High School in 1966. Shortly after graduation, he joined the United States Marine Corps and did a tour in Vietnam. After returning home, he married Christine Murray on September 5th 1970, and together had three children, William, Nicole, and Chad. Steve had a successful career as a truck driver for local businesses in Green Bay, but always had a passion for farming. He fulfilled his passion when he and Christine moved near Stangleville and started a hobby farm raising calves, horses, chickens, dogs, and cats. Steve also had a love for the outdoors and spent much of his free time with his boys hunting, fishing, and spending time at his cottage at Kelly Lake. He never missed an opportunity to make a kettle of booyah or chili and was always willing to entertain guests up at his cottage or at the farm. Steve was a man who would do anything and everything for anyone, especially his family. Whether it was putting on a new roof, or putting in a new water heater, he was always there to help, as long as you had a Miller High Life (or two) for him. His greatest joy was having his kids and grandkids with him at his farm. Whether it was feeding calves in the early hours of the morning, bailing hay all weekend, picking weeds in his never ending garden, or staying up late watching old Westerns, he always wanted to share his passion with his family and always found a way to convince everyone to come out to help. He even built a cabin on the farm for his nephew and right-hand man Scott Voelker, who he loved like a third son, so he could spend more time out there. He always appreciated the love and hard work that everyone gave to him, especially the Tim Voelker family, Jim Hunt family, and the Sid Lacrosse family. Steve loved his family and loved animals, so much so that he volunteered to care for the stray dogs in the town of Franklin. He named them all and even invited them into his home, the most recent being “Bump” and “Spin”, his babies that are now beside him in heaven. Steve will always be remembered for the love he showed to his family, friends, and his animals, the passion he had for his “hobby” farm, his never ending willingness to help someone in need, and him always asking if he could “just get a little help out on the farm God [email protected]^^!t.” Papa, you will be greatly missed by your nine little Indians. Now you can go be with Nana (Christine) in heaven! Steve is survived by his three children William (Jayne) Voelker, Nicole (Timothy) Geocaris, Chad (Jennifer) Voelker; grandchildren Megan and Samantha Voelker, Timothy and Thomas Geocaris, Max, Brittany, Charlie, Kylie, and Lincoln Voelker; his sisters Becki (Dick) Starry, Tammy (Dan) Vanden Bush; twin brother Stan (JoAnne) Voelker; brothers Randall Voelker, and Tim (Sue) Voelker; and many nieces and nephews. Steve is preceded in death by his parents William D and Mary Joan Voelker, and wife Christine Voelker. A special thanks to all of the fire fighters from Tisch Mills, Maribel, Two Creeks, Carlton, and Denmark, the rescue squads, sheriff’s department, and neighbors for all of their care and hard work on the day of Steve’s passing. Family and friends are invited to join in The Celebration of Steve’s Life on Friday March 6th between 4:00-8:00 PM at The Bar (East) 606 Lime Kiln Rd in Green Bay.

Stephen (Steve) Bruce Voelker, 71, passed away on Friday February 28th 2020 at his home near Stangleville, in the town of Franklin. Steve was born in Waterloo Iowa on August 4th 1948 and moved to Green Bay where he graduated from Green Bay... View Obituary & Service Information

The family of Stephen (Steve) Voelker created this Life Tributes page to make it easy to share your memories.

Send flowers to the Voelker family.