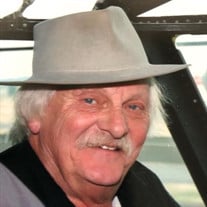 On the morning of October 12th 2019, Russell D. Manthei died at age 72. Born on December 2, 1946 to Lee Manthei and Eleanor (Rentmeester) Manthei in Green Bay. Russ graduated Preble High School, Green Bay, WI in 1964. He was drafted in 1966 into the Army and served until honorably in an inactive capacity until discharged. He met and lived with Cindy Seehawer in 1972 until his death. They had two children Samantha and Ryan who they raised with his other three children Chad Manthei, Hal Laluzerne, and Niki Kiehnau. Russ was a small business owner in the greater Green Bay as a scrap metal and demolition contractor. Russ also loved racing of any type of motorized vehicle. In the late 60’s, Russ raced boats with his father Lee, who was a regionally successful racer himself. Russ, then moved to racing snowmobiles in the 70’s where he then transitioned to racing stock cars at the local short tracks in Northeast Wisconsin. Russ also became a staple in the local racing community not only as a driver, but also building stockcars. In addition to this, Russ was a huge fan and supporter of the racing ventures of his children and a number of family friends throughout his life. Russ was the life of every party and he could always make you laugh and loved to talk to people. Russ was a kind hearted person with his open support for several charities. Most notably, he was a supporter of the Cystic Fibrosis Foundation and the March of Dimes. His children and grandchildren were especially precious to him. He is survived by his best girl Cindy Seehawer, children Hal Lalazerne, Samantha Manthei, Ryan and Michelle (Kane) Manthei, and Nicole Kiehnau, grandchildren Jordan Manthei, Chad Manthei, Wyatt Wilz, Jenna Wilz, Harrison Manthei and sister Mary Lee (Manthei) Sturzl, and extended family. He was preceded in death by his son Chad Manthei, father Lee Manthei, mother Eleanor (Rentmeester) Manthei, brother-in-law Mike Sturzl, and brother-in-law Skip Seehawer. A celebration of his life will be held at Cranky Pat's Pizza at 709 Bellevue St, Green Bay on Wednesday October 23rd from 6pm to 9pm. Family and friends welcome.

The family of Russell Manthei created this Life Tributes page to make it easy to share your memories.

Send flowers to the Manthei family.