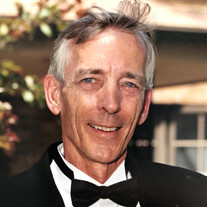 Russell Kent Handevidt passed away peacefully, surrounded by family, on July 4, 2019. Russ was born in St. Paul, Minnesota, on June 1, 1945 to Weldon and Jean (Leavitt) Handevidt. Russ grew up in Stillwater, Minnesota, and, after graduation, moved to Green Bay. There he met and married Nancy Pieschek, his wife of 50 years. Russ was most happy when he was surrounded by people. He was a member of the Green Bay Jaycees, United States Power Squadrons, Cub Scout leader, gymnastics judge and town supervisor. If you needed help, Russ was always there to lend a hand. Most of his work life was spent in sales and management. He ran the Owen’s gas station in Kimberly and later worked as a territory rep for Clark Oil. He retired from American Spring & Brake and then ran karaoke at B.J. Clancy’s. In his final years, he suffered from the effects of COPD. Russ loved boating, golfing, sturgeon fishing, Green Bay Packer games, bowling, chatting with friends and spending time with his family. He is survived by his wife Nancy; two children Faith (Sheldon) Wagner and Aaron (Brigitte) Handevidt; five grandchildren: Anthony, Alexander, Reese, Elena and Riley; siblings Roger, Victoria (Guy) and Andrea (Amy); brothers-in-law: Richard Lorenz and John (Sharon) Pieschek; and sister-in-law Sally (Rick) Mason. He is preceded in death by his parents, stepmother Marian; sisters Phyllis Handevidt and Linda (Richard) Lorenz; and in-laws Joanne and Jerome Gilles. A celebration of life will be held August 18 from 12-2 p.m. at the Appleton Yacht Club. Memorials may be directed to Theda Care Hospice or a charity of choice.

Russell Kent Handevidt passed away peacefully, surrounded by family, on July 4, 2019. Russ was born in St. Paul, Minnesota, on June 1, 1945 to Weldon and Jean (Leavitt) Handevidt. Russ grew up in Stillwater, Minnesota, and, after graduation,... View Obituary & Service Information

The family of Russell K Handevidt created this Life Tributes page to make it easy to share your memories.

Send flowers to the Handevidt family.