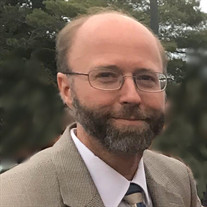 Russell Scott Gilbert, of Beecher, Wisconsin, husband, father, and friend, went to be with his Savior on Good Friday, April 10, 2020. He is survived by his wife Michelle, sons Xander and Nathan, and daughters Colette and Cate, as well as Michelle’s family, whom he considered his own: parents Clark and Sherri Lindsay of Beecher; sisters Kimberly Mann (Russ) of Racine; sister Shawna Lindsay of Crandon; and brother Will Lindsay (Angela) of Rock Springs, WY. He is also survived by his uncle Edwin Scott (Doreen) of Chattanooga, TN and cousins Christine (John), Brian (Rachel), and Andrew (Sonya). He was preceded in death by his parents, Alec and Marilyn Scott Gilbert of Royal Oak, MI and his grandparents, Edward and Muragatha (Diggs) Scott of Greenbush, MI and Paragould, AR. He is also survived by nieces and nephews. Russ was born on March 4, 1970 and adopted by Alec and Marilyn Gilbert of Royal Oak, MI. He graduated from Bethany Christian School, Bob Jones University, and Detroit Baptist Theological Seminary. He loved his home state of Michigan (and his Lions, Tigers, and Wolverines). He lived in Eagle Mountain, UT for 6 years where he assisted with a church plant, and he treasured those years. He never quite adapted to the weather in Beecher, WI, but he loved so many people here, and was grateful for their help and friendship. He loved to read and listen to sermons, mostly on cassette tapes, though he gradually adapted to listening to some on his phone. He had the most beautiful tenor voice, and he loved to play his trumpet, which he also played beautifully. He could converse easily with anyone, and he regularly helped out in ways that many people never even saw, but he found joy in it. He would drop what he was doing to assist whenever he saw a need. He loved spending time camping with his family and watching his kids play sports, sing, and play trumpet. He loved to study and teach the Bible. A memorial service will be scheduled in the months ahead, as it becomes safer for the public to gather to celebrate his life. The family would love for people to share their memories and stories of Russ’s life so they can gather them into a memory album.

Russell Scott Gilbert, of Beecher, Wisconsin, husband, father, and friend, went to be with his Savior on Good Friday, April 10, 2020. He is survived by his wife Michelle, sons Xander and Nathan, and daughters Colette and Cate, as well as Michelle&#8217;s... View Obituary & Service Information

The family of Russell Gilbert created this Life Tributes page to make it easy to share your memories.

Send flowers to the Gilbert family.