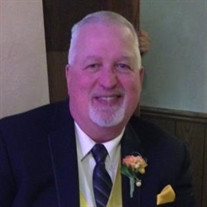 Ronald Eugene Zimdars was born on March 20th, 1949 in Shawano, WI. He died while at Shawano Health Care in Shawano, WI at 70 years of age. Ronald always had a fighters spirit and handled his health issues with grace. He would always say “It was in God’s hands”. Ron attended Marion High School and graduated in 1967. He attended technical college at Fox Valley Technical College, and while attending he was drafted into the Army, serving in South Korea. After the Army, Ron attended the University of Wisconsin – Stout. He had several professions throughout his career and finally settled in at SCA paper mill, working there for over 25 years. Ron had several passions in life. He loved the game of baseball. He enjoyed watching and playing baseball in high school for the Marion Mustangs, and also playing with the Leopolis Bulldogs. He was an avid outdoorsman, enjoyed fishing and looking forward to the yearly deer hunt with his family and friends. He had a great sense of humor and was always quick with a witty remark. Above all else he loved to sit down to a good game of cards and played Sheepshead frequently with family. Ron is survived by his sons, Ryan (Jenna) Zimdars and granddaughter Eleanor, Josh (Dusty) Zimdars and grandson Grayson, and the mother of his children Deborah Mendy. Also survived by brothers and sisters; Michael Zimdars, Charlotte (Tom) Brandenburg, Charles (Peggy) Zimdars, Janet (David) Carpenter, Jerry Zimdars, Thomas (Karla) Zimdars, Joan (Mitch) Kalota. He is further survived by many nieces and nephews. Ron was preceeded in death by his parents, Alvin & Mary Zimdars and his nephew Brian Brandenburg. Services will be held at St. Mary’s Catholic Church in Leopolis, WI, Saturday December 7 at 11:00 a.m. Visitation will be at 10:00 a.m. The family would like to extend a special thank you to Maple Lane, Shawano Health, and ThedaCare for the kindnesses extended.

Ronald Eugene Zimdars was born on March 20th, 1949 in Shawano, WI. He died while at Shawano Health Care in Shawano, WI at 70 years of age. Ronald always had a fighters spirit and handled his health issues with grace. He would always say &#8220;It... View Obituary & Service Information

The family of Ronald E. Zimdars created this Life Tributes page to make it easy to share your memories.

Send flowers to the Zimdars family.