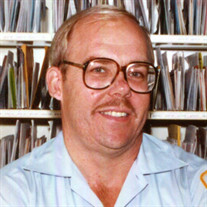 Ronald W. Trinkner, 78, Allouez, died September 25, 2020, after a 5-year battle with dementia. Ron was born in Green Bay, May 20, 1942, to Clarence and Ann (Osten) Trinkner. He graduated from Green Bay East in 1960. After high school, Ron joined the U.S. Army Signal School and was Honorably Discharged. On November 29, 1974, Ron married Patricia Buenning at St Matthew Church in Allouez. Ron was employed with the U.S. Postal Service as a mail carrier and retired after 37 years of dedicated service. After retiring from the USPS, he worked in the mailroom at Bellin Hospital. Ron also worked many years for The Village of Allouez Parks Department. He enjoyed working for his boss and friend, Brad Lange. Ron is survived by his wife, Pat; sister, Barb Goska and her husband Ron and family; and many nieces and nephews. He will be missed by the entire Buenning family, especially his nieces, Kristen Albers and Katie Halvorson, who he loved as if they were his own daughters. In addition to his parents, Ron was preceded in death by his brothers, Clarence and James; and sister-in-law, Karen Parson. Ron was a kind man with a big heart. He would drop anything he was doing to help others. He loved coaching, a good game of cribbage, the Packers, and the Oakland A’s! Ron was an avid dog lover and had many pets over the years, including his current dogs, Meg and Emma. Due to COVID, Ron’s family will have a celebration of his life at a later date. Pat would like to give a special thank you to Wyndemere Estates’ staff and residents for Ron’s care and their friendship during his stay, and to the staff of the Heartland Hospice. Your care and comfort meant so much! Simply Cremation, Green Bay is serving the family.

The family of Ronald W. Trinkner created this Life Tributes page to make it easy to share your memories.

Send flowers to the Trinkner family.