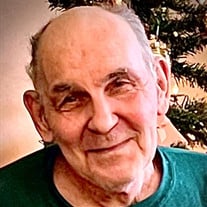 Ronald R. Mills, 72, of Green Bay, passed away Sunday, January 16, 2022, after a short battle with lung cancer. If you knew Ron, you would know that he liked to test boundaries with his sarcasm and sense of humor. He stayed this way up until his death making sure that his hospice nurses and other visitors knew to stay on their toes. Ronald was born in Green Bay on December 23, 1949, to Evelyn (Krizek) and Russell Mills. Ron graduated from Seymour High School in 1968. After graduation, he joined the United States Air Force. He worked as an Electrical Power PDN in Wichita Falls, KS and Anchorage, AK until his Honorable Discharge in 1971. Returning to civilian life, Ron worked several jobs before finding his passion in the scale industry. Ron joined the team at Valley Scale in 1983 as a Scale Technician and taught himself the computer programming skills needed to become a local leader in this field. Ron was also a sports enthusiast, he loved the Green Bay Packers, Wisconsin Badgers and the Milwaukee Brewers - never missing a game! His other hobbies included: gardening, cooking with his daughter, Natasha, debating politics, watching old movies and talking about history, planes and music with his grandsons, Izak and Noah. Ron is survived by his children Mackenzie Glodowski, Sean Mills and Natasha Mills; brother, Larry Mills (Sue Letourneau); sisters, Sandy Brandt (Jim), Virginia (Jo) Mills; grandchildren, Izak and Noah Glodowski; nieces and nephews; his close cousin, Margie Krizek and close family friend, Susan Lavassor. Ron was preceded in death by his mother and father, Russell and Evelyn, and brothers, Chester and James. A celebration of life will be held in late spring when we are able to safely gather outdoors. Please send an email to [email protected] if you would like to be added to the mailing list to receive an announcement. Ron’s family would like to thank the hospice care providers at Unity Hospice Meng Residence for making his final days, peaceful ones. In lieu of flowers, the family is asking for donations to one of Ron’s best loved organizations, Veterans of Foreign Wars at www.heroes.vfw.org

Ronald R. Mills, 72, of Green Bay, passed away Sunday, January 16, 2022, after a short battle with lung cancer. If you knew Ron, you would know that he liked to test boundaries with his sarcasm and sense of humor. He stayed this way up until... View Obituary & Service Information

The family of Ronald R. Mills created this Life Tributes page to make it easy to share your memories.