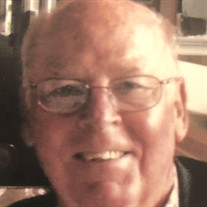 Ronald George Mann passed away peacefully on August 14 at the age of 79. Ron was born January 10, 1941 in Green Bay, Wisconsin and was the oldest child of George and Antoinette Mann. Upon graduating from Green Bay West High School in 1959, he enlisted in the United States Marine Corp. In 1963, Ron married his high school sweetheart, Barbara (Koch) Mann, and together they raised two wonderful daughters. Ron enjoyed a successful career in sales, and upon his retirement in 1998 became a part-time bailiff with the Brown County court system. This was a job he truly loved even though he often joked that he made more money peddling papers as a teenager than he made as a bailiff. Ron loved attending the yearly deer camp in the fall, but only as the camp cook. He was in his element when entertaining friends and familiy and learning the fine art of home brewing and meat smoking. He had a passion for the game of golf, winning several championships during his years of play. But perhaps his greatest pleasure in golf was being able to introduce his two grandsons to the game he loved so much and taking them to the clubhouse for a root beer afterward. During his last months of life, Ron loved watching the birds and wildlife in his backyard with his wife by his side. Survivors include his wife Barbara of 57 years, their two daughters, Jennifer (Michael) Rouse, Green Bay, and Gretchen (Gregory) Kroll, and grandsons, Dylan and Lukas Kroll, Glendale, WI, a sister Phyllis (Milton) Kimps, Green Bay, his brothers, Craig (Sheri) Mann, Tallahassee, FL, and David (Sally) Mann, DePere, WI. Ron is preceded in death by his parents. The family wishes to express their gratitude to Aurora at Home Hospice--specifically Alicen, Jessica, Stephanie, and Mary--for the excellent care and support provided to Ron and his family during his illness. A celebration of Ron’s life will be held at a later date.

Ronald George Mann passed away peacefully on August 14 at the age of 79. Ron was born January 10, 1941 in Green Bay, Wisconsin and was the oldest child of George and Antoinette Mann. Upon graduating from Green Bay West High School in 1959,... View Obituary & Service Information

The family of Ronald George Mann created this Life Tributes page to make it easy to share your memories.

Ronald George Mann passed away peacefully on August 14 at the...

Send flowers to the Mann family.