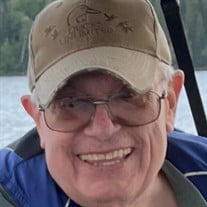 Ronald Dean Hentz passed away on Friday, April 22, 2022, at the age of 75. After a two and a half year health battle, Ron passed from complications due to cancer with his beloved wife Naoko and daughters by his side. Originally from Oshkosh, WI, Ron was born June 26, 1946 to Francis and Dorothy (Reisenweber) Hentz. Ron was a proud veteran of the United States Air Force and retired as a CMSgt with 21 years of service in military intelligence, surveillance, and reconnaissance. He served in both the Vietnam and Cold Wars as a Russian linguist. Throughout his service, Ron was stationed around the world, most notably spending ten years in Japan where he met the love of his life in Okinawa and together started their family. He enjoyed experiencing new cultures and studying languages such as Russian, Japanese, Okinawan, Latin, and most recently, Spanish. Ron's military service remained his proudest accomplishment and he actively supported military groups and causes throughout his life. After retiring from the Air Force, Ron started a second career with the US Postal Service, eventually retiring as Postmaster of the Menasha Post Office. Retirement left Ron free to enjoy his favorite hobbies, including volunteering, fishing, traveling, and watching sports. Those close to him remember him as a patient and devoted husband and father, fair and compassionate leader, an enthusiastic fisherman, a jokester with a wonderful sense of humor, and someone who gave the best hugs. Ron is preceded in death by his father, Francis Hentz, mother, Dorothy Hentz Hammer, and brother, Richard Hentz. He is survived by his wife, Naoko; 3 daughters Emily (Aaron) Hoffmann, Aileen (Brian Asti), and Paula; 4 grandchildren, Theodore, Nealan, Rae, and Kai; brother Randy (Sharon), sister Kate (Roger) Anderson; and many cousins, nieces, and nephews. A memorial service with full military honors will take place on Saturday, June 4 at Lake View Memorial Park, 2786 Algoma Blvd, Oshkosh, WI 54901. A masks-required visitation will begin at 10:30am, the funeral liturgy at 11:30am, and a military memorial service immediately following. If so inclined, the family encourages donations to the USO in Ron’s honor.

Ronald Dean Hentz passed away on Friday, April 22, 2022, at the age of 75. After a two and a half year health battle, Ron passed from complications due to cancer with his beloved wife Naoko and daughters by his side. Originally from Oshkosh,... View Obituary & Service Information

The family of Ronald Dean Hentz created this Life Tributes page to make it easy to share your memories.

Send flowers to the Hentz family.