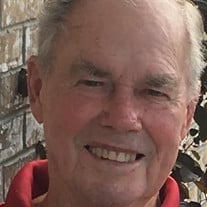 Rodney Kellam, 87, Green Bay, WI passed away peacefully with his family by his side on Sunday May 26, 2019. He was born in Benton Harbor MI to the late Leroy & Gly Kellam. Rodney Graduated from Pulaski High School in 1950. Rod was a proud veteran of the US Navy; serving in the Korean War from 1950-1954 aboard the USS CVE 88 Cape Esperance. Rod then joined the US Air Force and served from 1958-1960. On June 18, 1960 Rod married his sweetheart Susie Connolley at St. James Catholic Church in Orlando FL. This June would be the lovebird’s 59th anniversary. He then joined the US Army Reserve serving 17 years. Rod retired from the military after 23 years of total service. Rod was actively involved in the Ashwaubenon community. Rod took over the Commissioner position for the Ashwaubenon Youth Baseball League when it consisted of a couple minor & little league teams that shared bats and catchers equipment. After 5 years it had 16 minor league teams, 14 little league teams, 5 Babe Ruth teams and an American Legion team, building the League to over 600 participants. Rod continued as commissioner for a total of 10 years. The league is still flourishing today. Rod and his wife Susie then began the Ashwaubenon Girls Softball League beginning a winning tradition that continues today. Rod also served Ashwaubenon as a baseball coach, a hockey coach, a cub master, a VFW commander, receiving many community awards for his work and dedication. Rodney loved woodworking in all aspects from cabinet making to artistic turnings on the lathe to making beautiful jewelry for the people he loved. Later in life Rodney attended NWTC earning a degree in Master Woodworking of which he was very proud. Rodney and Susie spent much of their retired life traveling the United States and abroad, spending many winters in Florida. He is survived by his wife Susie; his children; Bill (Jessica) Kellam, Karen (Chad) Hagenman; his grandchildren; Ashley, Alex, Kelsey & Emma; his siblings, Jerry Kellam, Sharon Budz, Kay (Butch) Kettleson; sister-in-law; Jeanette Kellam, special Goddaughter Julie & many nieces and nephews. He was preceded in death by; his parents and his in-laws; his son, Todd; brothers, Jim & Duane; brothers-in-law, Joe Karcz & Ray Budz; sisters-in-law, Nancy, Nelyn & Dorothy Kellam; nephews, Greg Budz & Jimmy Wood; nieces, Laura Karcz and Christine(Kellam). Visitation will be at Nativity of our Lord Parish, 2270 S Oneida St Green Bay, WI 54304 from 10 a.m. to noon Friday June 7. A Memorial Mass will follow at noon officiated by Father Michael Ingold. Military Honors will be held to honor Rodney’s service.

Rodney Kellam, 87, Green Bay, WI passed away peacefully with his family by his side on Sunday May 26, 2019. He was born in Benton Harbor MI to the late Leroy & Gly Kellam. Rodney Graduated from Pulaski High School in 1950. Rod was a proud veteran... View Obituary & Service Information

The family of Rodney D. Kellam created this Life Tributes page to make it easy to share your memories.

Send flowers to the Kellam family.