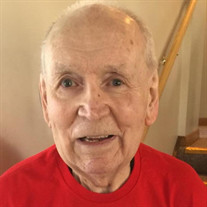 Robert Henry Dessart (Sarge), passed away peacefully at home on January 27, 2022. Sarge was born on February 3, 1927 in Green Bay to Henry Arshel and Elizabeth Dessart (Miller). He was a graduate of Annunciation grade school and West High School. Sarge served his country honorably as a member of the US Army during WWII. He married Theresa Edlebeck in June 1951. He worked for many years at the Northern Papermill and later with The Green Bay School Board for 25 years. He also had his own janitorial business. Sarge will be remembered as a gentle man, who put family ahead of everything. He opened his home and his heart to anyone in need. Sarge was a lifelong football fan having played in high school and coached local school teams. Like his dad, who was from Chicago, he was a Cubbies fan and loved to watch Brewers and Packers games with his kids. He is survived by his children, Pattie (Dave), Pete, Donna, Debbie Beaudry (Danny), Tom (Virg). Liz Degroot (Kelly), Lisa Duffy (Bob), Wendy Wallender, grandchildren Katie, Gwen, Noah, Jeri, Joe, Abbey, Tyler, Madison, Courtney, Lee, DJ, Charity, Danielle as well as 16 great grandchildren. He was predeceased by his wife Theresa, son Robert J., daughter-in-law Brenda and grandkids Peter, Amy, Amanda, and Charles Jr. Your prayers are requested for the happy return of his soul to rest. Memorial and mass for Robert H and his son Robert Joseph will be held at Annunciation Church on Friday, February 4. Viewing 10am-12pm, Mass at noon. Robert’s family would like to extend their sincere gratitude to Compassus, the VA home-based care team, Healthy Hands Caregivers and Kim and Dawn for their loving care on Robert’s behalf.

Robert Henry Dessart (Sarge), passed away peacefully at home on January 27, 2022. Sarge was born on February 3, 1927 in Green Bay to Henry Arshel and Elizabeth Dessart (Miller). He was a graduate of Annunciation grade school and West High... View Obituary & Service Information

The family of Robert Henry Dessart created this Life Tributes page to make it easy to share your memories.

Send flowers to the Dessart family.