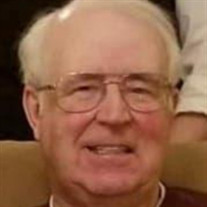 Robert Allan Arends “R.A.” passed away at his home in Sturgeon Bay, WI on January 1, 2021 at the age of 81. Robert was born April 14, 1939 in Watseka, Illinois, the son of Allan and Mary Arends, formerly of Gilman, Illinois and Lakeland, Florida. On November 24, 1960, he married Marianne Borchers of Danforth, Illinois. They celebrated their 60th wedding anniversary this past November. He spent his formative years in Gilman, Illinois where he was a Boy Scout. In high school, “Pierre” was an industrious trapper, enjoyed singing in chorus, playing trumpet and acting. He served in the United States Marine Corps Active Duty, Marine Corps and Air Force Reserves, and attended college at Illinois State Normal University. He worked as a State Farm Insurance agent, game warden, teacher, and guidance counselor, and spent the majority of his working life as a WEAC negotiator and arbitrator. He earned respect for his accomplishments on behalf of Northern Wisconsin’s teachers. Robert and Marianne started their married life in Illinois, later moved to Wisconsin, and spent the majority of their lives in the beautiful Northwoods of Wisconsin…always on the water. They provided wonderful childhood experiences for Rob and Lisa on lakes near Hayward, Tomahawk, and Crandon. They eventually spent several years on Green Bay in Marinette and finally on a lagoon off Sturgeon Bay. Robert was a lifelong, enthusiastic fisherman beginning in childhood on the waterways of East Central Illinois. Some of his experiences included catfishing in the Wisconsin River, guiding walleye anglers on the Eau Claire Chain of Lakes in Sawyer County, Great Lakes trout and salmon fishing, crappie fishing at Kentucky Lake, shrimping in the Florida Intercoastal Waterway, and pompano fishing in the Panhandle of Florida. Robert enjoyed a wide variety of hobbies and interests ranging from model trains inspired by his grandfather’s work with the Illinois Central Railroad, to scuba diving, shooting pool (1969 Sauk County Pool Champion), riding motorcycles, and astronomy. He obtained his pilot’s license, owned a Cessna 172 and later spent many hours on Flight Simulator software. He enjoyed space-based computer games, and matching wits playing chess and checkers. He was an amateur extra HAM radio operator. He had an enduring appreciation for cats and treasured the company of many “kitty pals” over the years. He was a member of the Masonic Lodge of the State of Illinois for 61 years and was a 32nd degree Master Mason. Robert was a man of keen intellect. He will be remembered as a lifelong learner and educator both in his career and with his family, always eager to impart his knowledge in a variety of areas. Robert will be sadly missed by his wife Marianne Arends of Sturgeon Bay; son Rob (Cindy) Arends of Sturgeon Bay, WI; daughter Lisa (Pat) Fehrenbach of De Pere, WI; 4 grandchildren: Megan Arends of Suffolk, England, Soren Fehrenbach of De Pere, WI, Katelyn (Lucas) Hanson of Appleton, WI, and Shelby Fehrenbach of De Pere, WI; 2 great-grandchildren: Freddie and Mollie Bowers of Suffolk, England; a sister Susan (Jeff) Carpenter of Tampa, Florida; and many nieces and nephews. He was preceded in death by his parents Allan and Mary Arends, and his sister Marcia. The family will hold a private celebration of his life at a later date.

The family of Robert Allan Arends created this Life Tributes page to make it easy to share your memories.

Robert Allan Arends “R.A.” passed away at his home in Sturgeon...

Send flowers to the Arends family.