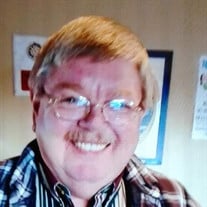 Richard "Dick" Howard, 63, of Wilson, MI, passed unexpectedly, January 17, 2020 with his family by his side. Born on April 26, 1956, he is the son of the late Floyd and Viola Howard. He married Anita Wandahsega on May 27, 1975, in Oshkosh. Dick retired from Woodmans in Appleton, WI, in 2012 and after his retirement he moved to Wilson, MI with Anita. He enjoyed camping, boating, four wheeling, going to car shows, driving his Dodge Challenger, and times spent with family and friends. Dick was a loving husband, father, grandfather, and great grandfather. His love for life showed through the numbers of people he had befriended through the years. He is survived by his wife of forty four years, Anita; two daughters, Lisa (Kelvin) Batten of Northern Kentucky, Shar (David) Damro of Omro, WI; four grandchildren, Mason (Lauren) Philemon, Griffin (Amara) Philemon, Olivia and Avery Damro; great grandchild, Evelyn Philemon; siblings, Gene (Peggy) Howard, Jane Dolan, and Dennis (Sue) Howard; very close family friend, Marvella Brey along with many nieces and nephews. Dick was preceded in death by his parents; three siblings, Floyd Howard, Jr., Janet Lewis, and James Howard. A celebration of life will be held at a later date. The family would like to extend a special thank you to the Wandahsega and Sagataw family for all of their support during this difficult time. Also a special thank you to the staff of St. Vincent Hospital and Unity Hospice.

The family of Richard Howard created this Life Tributes page to make it easy to share your memories.

Send flowers to the Howard family.