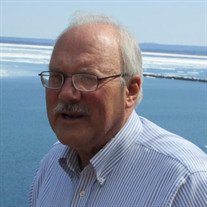 Richard Blake Frischkorn, 67, of Suring, Wisconsin, passed away on October 28, 2021. Rich was born in Chicago, Illinois on May 14, 1954 to parents Irwin and Jean (nee Lander) Frischkorn. When he was 5, his family moved out of Chicago and he spent time growing up in Morris, Illinois and Bettendorf, Iowa. Rich moved to Florida and attended the Florida Institute of Technology, where he received an Associates Degree in Oceanography. While he was at FIT, he went on a ride-along with the Martin County Sheriff's Office, leading to a 20-year career in law enforcement with Martin County. During his time with MCSO, he worked part time in Christian radio. After retiring from MCSO, Rich transitioned into full time Christian radio, ending up working at WRVM in Suring in 1999. He worked there all the way to the time of his passing. Rich married Debra Eaves on April 12, 1985. Rich and Deb had four children together: Nathan Frischkorn, 32, of Marquette, Michigan; Adam (Tymberlyn) Frischkorn, 30, of De Pere, Wisconsin; Joshua Frischkorn, 27, of Mountain, Wisconsin; and Jessica (Andrew) Jesse, 25, of Robbins, Tennessee. Rich was known in the community as someone who would always help out a neighbor and tell a few stories. Rich is survived by his loving wife, Deb; his brother Robert (Gloria) Frischkorn; his sisters Nancy Ferguson and Karen (Mike) Spurrier; his sons Nathan, Adam, and Joshua Frischkorn; his daughter Jessica Jesse; his grandchildren Nora Frischkorn and Alexander Jesse; and many nieces, nephews, and cousins. He is preceded in death by his parents, aunts, and uncles. A celebration of his life will be held on Saturday, November 13 at Riverview Alliance Church at 628 N. Main St in Oconto Falls. Visitation will be from 9:30am to 11am, followed by the service. A post-service luncheon will follow.

Richard Blake Frischkorn, 67, of Suring, Wisconsin, passed away on October 28, 2021. Rich was born in Chicago, Illinois on May 14, 1954 to parents Irwin and Jean (nee Lander) Frischkorn. When he was 5, his family moved out of Chicago and he... View Obituary & Service Information

The family of Richard Blake Frischkorn created this Life Tributes page to make it easy to share your memories.

Send flowers to the Frischkorn family.