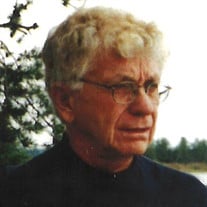 Richard "Dick" Borg, Ashwaubenon, was freed from his pain and suffering on Tuesday January 14, 2020 at the age of 80 years with wife Anne by his side. Born in Superior WI to the late Leonard and Bertha Borg Lee. He graduated from Superior Central High class of 1957. After serving in the Army, Dick earned his degrees from the UW Superior. He retired after 26 yrs as a Vocational Rehabilitation Counselor for the state of Wisconsin working in Superior, Ashland and Northeastern WI. Dick was an avid reader of history. He had a special interest in breweries of the past in the upper Midwest having worked at Northern Brewery. He had a great love of cars. Attending car shows and talking cars of all vintages. Driving the back roads in his collector Lexus was a real high for Dick! An important part of life was the comradery with his friends at morning coffee sessions. Over the years Dick enjoyed playing baseball, snowmobiling, bowling and golf. He looked forward to golfing with his friends and son Rick. Dick and Anne had many good time road trips to music fests, U.P. Fall color tours and winter break get aways south. Dick was a never wavering MN Vikings fan since their inception in 1961. Completing a bucket list of being to all three of their stadiums with a tour of the "Beautiful Purple" new stadium. His other love was walking his four legged friends on local trails and through the neighborhood over the years. Dick is survived by his wife Anne (Anderson), loving dog Gus, daughter Janine Matthews of MN and her son Jelani Haye; son Rick "Thumper" Borg (Terri) of Florida and their sons Maxwell and Nicholas. Brother in laws Howie (Bev) Anderson, Bill (Kat) Anderson, sister in law Arnelle (Larry) Monson. Also members of the "B" team from Crystal Springs G.C. Preceding Dick; stepfather Vic Lee, mother and father in law Arne and Ellen Anderson, good friend David Redard and many furry walking companions. The family would like to thank all who cared for Dick on his very difficult journey. Also those who visited with him at Allouez Parkside Village. A special thank you to our caring helpful neighbors Bob and Mary. Interment will take place in Superior this summer. Gatherings for family and friends will take place at future dates. Memorials to Animal Rescues, Humane Societies or Dementia Heart Disease Research.

Richard "Dick" Borg, Ashwaubenon, was freed from his pain and suffering on Tuesday January 14, 2020 at the age of 80 years with wife Anne by his side. Born in Superior WI to the late Leonard and Bertha Borg Lee. He graduated from Superior Central... View Obituary & Service Information

The family of Richard "Dick" Borg created this Life Tributes page to make it easy to share your memories.

Richard &quot;Dick&quot; Borg, Ashwaubenon, was freed from his pain and...

Send flowers to the Borg family.