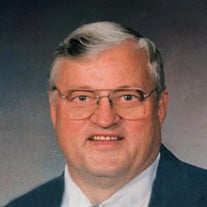 Alvin M. Peterson, 92, passed away on Tuesday, October 27, 2020. Pastor Al was born on September 20, 1928, in Frederic, Wisconsin. He is the son of the late Harold and Vivian Peterson. Alvin grew up in Frederic and went to both Frederic Grade School and Frederic High School and graduated in 1946. After graduation, Al worked on the family farm for several years before attending St. Olaf College in Northﬁeld, Minnesota. He played football for the Oles and graduated from the school in 1959. He followed his calling and attended Luther Theological Seminary in St. Paul, Minnesota where he was ordained as a Lutheran Minister in 1963. Alvin married Edna (Borup) Peterson on June 9, 1956. Their love grew for 64 years. Pastor Al ﬁrst served Mt.Carmel Lutheran Church in Milwaukee. From there, he was called to Gloria Dei Lutheran Church in Menomonee Falls. In 1974, Al received the call to be pastor at Emmanuel Lutheran Church in Seymour. His ﬁnal calling was as interim pastor for Faith Lutheran Church in Milwaukee. Pastor Al retired in 1994 and was an ordained minister for over 55 years. Al was the founding chairman for Good Shepherd Nursing Home in Seymour and was awarded the Outstanding Citizen for his work in the Seymour Community. Pastor Al served on many church boards of the ELCA throughout his ministry. He was a man of the soil and was always concerned for the farming community. Alvin enjoyed woodworking, ﬁshing, and spending time with his friends sharing Ole and Lena jokes. In retirement, he enjoyed many memory-ﬁlled summers at Lake Amy Belle and warm winters in Mesa, Arizona where he loved playing in the men's softball league. He was a devout sports fan who loved watching the Brewers and Packers. Alvin is survived by his wife, Edna; two children, Bradley Peterson, and Anne (Chris) Krueger; grandchildren, Jerad (Shannon) Cliﬀord, Eric (Kelsey) Cliﬀord, and Carissa Cliﬀord; great grandson, Charles Cliﬀord; and siblings, Kenneth (Lucille) Peterson, and Reuben (Jean) Peterson. Al was preceded in death by his parents and sibling Harry (Carol) Peterson. Due to COVID concerns, the family will hold a celebration of life and share the video for all to enjoy on the Simply Cremation website. https://youtu.be/bmovIKuC1Rk The family would like to extend a thank you to Dr. Rai for his special care and to Amy and all the nurses and caregivers at Woodside Lutheran Home. Finally, a heartfelt thank you to all of our friends and family who meant so much to Al throughout his life.

Alvin M. Peterson, 92, passed away on Tuesday, October 27, 2020. Pastor Al was born on September 20, 1928, in Frederic, Wisconsin. He is the son of the late Harold and Vivian Peterson. Alvin grew up in Frederic and went to both Frederic Grade... View Obituary & Service Information

The family of Rev. Alvin Martin Peterson created this Life Tributes page to make it easy to share your memories.

Send flowers to the Peterson family.