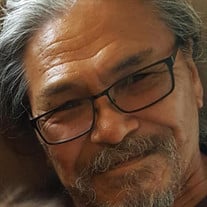 Raymond Beans (Ciikall&#8217;eq), 69, passed away with his family by his side in his home in Oneida, WI on Thursday, March 11, 2021. Raymond was born in Mountain Village, Alaska to the late Patrick and Irene (Peterson) Beans Sr. on January... View Obituary & Service Information

The family of Raymond Beans created this Life Tributes page to make it easy to share your memories.

Raymond Beans (Ciikall’eq), 69, passed away with his family by...

Send flowers to the Beans family.