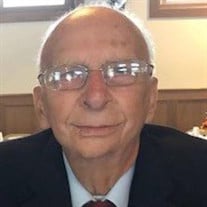 Peter Carl Tuchscherer, 83, Suring, passed away Wednesday, March 23, 2022, at home surrounded by his loving family. Peter was born August 19, 1938, son of the late Theodore and Helen (Bartmann) Tuchscherer. He married Bonnie Schulz on September 3, 1969, at St. Mary's of the Lake in Lakewood. He proudly served his country in the United States Army, and later worked in several jobs during his career, including for the US Forest Service and Evenflo, before retiring in 2003. Peter earned his Associate Degree in Landscaping from NWTC. Pete enjoyed woodworking, gardening, making bird houses and feeding the birds, landscaping, building a gnome house on his property, and remodeling his home. He loved spending time with his grandkids. He will be deeply missed by his loving wife of 52 years, Bonnie; 4 children: Carl (Ann) Tuchscherer, Stevens Point, Shannon Tuchscherer, Underhill, Joseph (Rebecca) Tuchscherer, Underhill, and Margaret Killingsworth, Texas; 6 grandchildren: Josh (Chelsie), Kendra, Nicholas, Lucas, Jack, and Matthew; 2 great-grandchildren; and a niece, Jerilynn Abba. In addition to his parents, Peter was preceded in death by his brother, Theodore; and sister-in-law, Ruth Tuchscherer. Visitation will be held on Friday, April 8, 2022 at Emmanuel Lutheran Church in Breed from 9am until the service at 11am with Pastor Steven Stoll officiating.

The family of Peter Carl Tuchscherer created this Life Tributes page to make it easy to share your memories.

Send flowers to the Tuchscherer family.