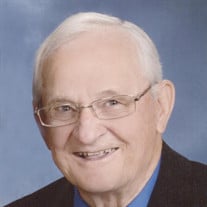 Pat’s journey has come to an end. He peacefully joined the Milewski family, as the youngest of 19 children, in Heaven on September 24, 2019. Pat was born on a farm in Lena, Wisconsin (town of Little River) on March 16, 19298 and grew up in Milwaukee, where he loved to follow the Milwaukee Braves baseball team (later, the Milwaukee Brewers). During World War II, when his older brothers joined the military, Pat left Milwaukee Boys Tech school (at the age of 16) and joined the Merchant Marines. He was an “oiler” on a supply ship which traveled across the Atlantic three times to ports in Europe. Unfortunately, he contacted tuberculosis and became hospitalized on his return to the States in various sanatoriums-at the ages of 17-18. He developed his love of fishing, however, in the Tomahawk, Wisconsin at one of the tuberculosis camps. From then on, fishing became the focus of his leisure time. He completed his remaining two- year Army commitment, during which he acquired acclaim for aircraft maintenance at De Havilland Aircraft Air Base in Canada. Pat was discharged with honors to Krakow, Wisconsin. He married Cecil Erdman, worked with his brothers in repairing electric motors for Krakow Electric-and fished. Pat and Ceil never had children of their own, but they became immersed in other people’s children. Ceil, being a teacher and enjoying many nieces, nephews and special young people to young people to mentor (especially Ron Ripley, with whom he shared a special bond of fishing). When Ceil died, Pat met her nurse, Sue Steavpack, whom he was married to for 40 years. He became a loving stepfather to five children (Mike, Rick, Dave, Jim and Carrie Steavpack) continued his great love of fishing, becoming the “muskie man of Windfall Lake” in Wabeno, Wisconsin, where their cottage became a family vacation and honeymoon place. Retirement, for Pat and Sue, was enhanced with travel, eleven grandchildren and five great grandchildren. He is missed by everyone who knew this simple and beloved Polish man, loving husband and grandpa. Special thanks to lifelong friends Jerry and Shirley Prosek. Peace to you, Pat, in your eternal “Fishing Place”, where your fishing stories will certainly top them all! We can hear you shouting “Hooray, Brewers!” and “Go Pack, Go!” GRANDCHILDREN ADDITION: “Grandpa loved the Brewers and fishing ALMOST as much as he loved his family. He brought balance, humor and humility into our family.” (by Emilie) “His big, loving heart, allowed him to be adored by all of his grandchildren and great grandchildren. Trips to the cottage in Wabeno, which he and his family built, were favorite memories. Fishing with grandpa was something to be remembered, as he was a patient man. He enjoyed many sporting events of his grandchildren. He was a kind human being who will be dearly missed by all who knew him. We love you and miss you, Grandpa. (Gone Fishing- 09/24/19)” (by Alex). A memorial celebration of life will be announced at a later date.

Pat&#8217;s journey has come to an end. He peacefully joined the Milewski family, as the youngest of 19 children, in Heaven on September 24, 2019. Pat was born on a farm in Lena, Wisconsin (town of Little River) on March 16, 19298 and grew up... View Obituary & Service Information

The family of Patrick Milewski created this Life Tributes page to make it easy to share your memories.

Pat’s journey has come to an end. He peacefully joined the Milewski...

Send flowers to the Milewski family.