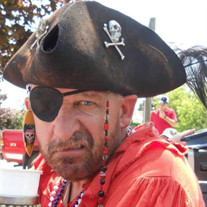 Norman Robert Abts, age 69, of Green Bay, passed away on September 29th, 2019 in Appleton Wisconsin. Norm was born in Green Bay to Norman S. and Joyce (Anderson) Abts. He went to school at Green Bay West High School. Norm worked as a driver for UPS for 41 years. He was involved in many charitable organizations in Door County, where he had his second home. He loved to travel, and took his children and grandchildren to Disneyworld in 2014 for the best family vacation ever. He enjoyed nights in Harbour Village around the fire, fishing, softball, wrestling, and was an avid Wisconsin team sports fan. Norm is preceded in death by his mother and father, Norman S. and Joyce Abts. Norm is survived by his children; Jeffrey (Keri) Abts, Tami (Juli Curtis) Abts, Jason (Erica) Abts and the mother of his children, Mary Abts. He is further survived by six grandchildren; Jonah and Micah Abts, Draven Vaile, Jacob, Jason JR. and Joshua Abts. He is also survived by his brother Larry (Shirley) Abts and sister Dianna (Dave) Cornelissen. The family of Norm Abts wishes to extend our sincere thanks to his sister and brother, Dianna and Larry for being there for him always, he loved his siblings. The family would also like to thank his friends at Harbour Village. He has many great memories with many great friends. His life was full with fun, laughter, and travel with many of you. Norm had just moved in with his son Jeff, and he was enjoying every second with his grandsons. He was truly happy and was back to his old goofy self. We will miss the kind, gentle soul that he is. A Celebration of his life will be held at Harbour Village at a future date.

The family of Norman Robert Abts created this Life Tributes page to make it easy to share your memories.

Send flowers to the Abts family.