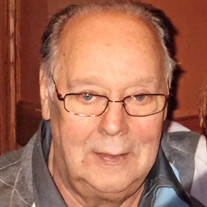 Michael Thomas Heinly, 81, of DePere, WI passed peacefully on Wednesday, February 12, 2020. A service of celebration will begin at 11:00 AM on Saturday, February 29, 2020, at Oakbrook Church of DePere. Before moving to Wisconsin in the 1960s, the early years of Mike’s full life were spent in Pottsville, Pennsylvania. He loved sharing stories of his adventures in the neighborhoods tucked into its hills. Mike remained connected to his beloved hometown through his readings of the online edition of its daily newspaper. From 1956-1960, Mike served his country in the Air Force and then in the Army Reserves from 1978-1992. The proud father of four children –– Beth, Mary Ellen, Jessica, and Joshua –– Mike’s family was his greatest treasure. After 35 years of employment by Fort Howard Paper Company, Mike’s retirement years were spent with his many family and friends. One could often overhear Mike encourage his grandchildren toward their goals, talk with sincere interest about their day, and be the first to introduce them to the card game of solitaire. Mike never met a stranger - finding something in common with everyone he met, and developed lifelong friendships on Blue Heron Drive over 21 years. Mike is survived by his wife Diane and four children, Mary Ellen Heinly and Sweetie Pie; Beth Heinly-Munk and Stuart Munk and daughter Beatrice; Jessica (Hussin) Lahner and Kevin Lahner and children Chase, Noah, Jax, and Britton; and Joshua Hussin and Thavy Kuy and children Logan, Angeline, and AJ. In lieu of flowers, the family kindly requests donations be gifted to Wounded Warriors Family Support and Homes for Our Troops.

Michael Thomas Heinly, 81, of DePere, WI passed peacefully on Wednesday, February 12, 2020. A service of celebration will begin at 11:00 AM on Saturday, February 29, 2020, at Oakbrook Church of DePere. Before moving to Wisconsin in the 1960s,... View Obituary & Service Information

The family of Michael Thomas Heinly created this Life Tributes page to make it easy to share your memories.

Send flowers to the Heinly family.