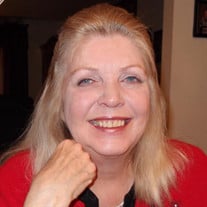 Mary Behrendt, 73, passed away peacefully with her children by her side on April 30, 2019. Mary was born May 5, 1945, to Arnold and Ethel Mae Hagens in Green Bay Wisconsin. In 1961, she married Richard “Dick” Behrendt, and a 57 year love, friendship and adventure began. Mary’s true joy in life came from the time spent with her family and many friends. As a young woman, she was a member of the Magnetos Motorcycle Club, and often reminisced of the joyous times with her friends riding her motorcycle. She raised three children and spent several years working for American Family Insurance. Upon retirement, she and Dick hit the road with their fluffy white dog, Jake, spending the next 18 years exploring the country in their RV. Mary was the RV navigator and using only map books and her quick wits, she guided the two of them through 49 states, and countless national monuments and parks; creating a lifetime of memories and making new friends everywhere they went. The home she created was often the gathering site for friends, relatives, and acquaintances; past and present to stop by and find great company, good food, and usually a beer or six. Mary was a very loving woman, and will always be remembered for her giving nature, her willingness to sacrifice anything for those she loved and, of course, her spunky personality! Mary is survived by her son, Bill (Debbie) Behrendt; daughter, Marnie (Amber) Behrendt; four grandchildren, Jessi (Josh) Behrendt, Samantha (Ron) Lealiou, Joce Glanner, and Quentin Glanner; five great-grandchildren, Tyler, Aria, Finnigan, Oliver, and Inara; one brother, Jon (Nancy) Hagens; one brother in law, Dave (Kay) Behrendt, a nephew, Arnie Hagens; and niece Lou Ann (Ken) Cerk; and a faithful Golden, Lucas. Mary was preceded in death by her husband, Dick; a son, Jim; One sister, Linda; and her parents. The family would like to thank Dr. Lisa Chen. Mary spoke often of how Dr. Chen made her feel comfortable and safe while in her care. Mary’s family will be holding a celebration of life for Dick and Mary Behrendt on Saturday, July 27, 2019, 12:00pm at the Behrendt home. Friends and family are invited to enjoy the famous Behrendt booyah and some beers.

The family of Mary Behrendt created this Life Tributes page to make it easy to share your memories.

Mary Behrendt, 73, passed away peacefully with her children by...

Send flowers to the Behrendt family.