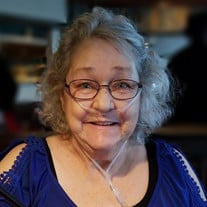 Levada Sharon Pope September 19, 1944 – December 8, 2019 In the predawn hours of Sunday, December 8th, 2019, after a long struggle with pain and illness, Levada Sharon Pope peacefully made her life’s last passage. Levada will be remembered for her loving generosity, her irresistible charm, her brilliant vivacity, and her fighting spirit. She will be deeply missed by her children Alan Joseph (Joe), Jr. (Lisa), Robert (Kathrine Mero-Pope), Daniel (Adelia), Sheri Mealy, Jessica Kalagher (Sean), Andrew (Jeanette), her surviving siblings, Judy Carolyn Gentry (Darrell), Walter Norman Jones (Bonnie), Wanda Dolores Rutledge (Ken), and Sandra Lee Schwenn (Brian), her loving grandchildren and great-grandchildren, other family, friends, and truly all who knew her and loved her. She was preceded in death by her brothers James Harold, Larry Sherman, Kenneth Ray, and Claude David (Crocky) (Hilda) and her daughter Veronica Robin Shelton. Levada was born in Owensboro, Kentucky to David Harold Jones and Lena Margaret Durham, the second of nine children. She lived her early childhood in Indiana and Kentucky, where she remembered her mother sitting up late on stifling summer nights to fan the sleeping children with a scrap of cardboard. In her ninth year, her family moved north and lived in a small, cold-water flat on South California Street in Chicago and later into a house as the family grew. As the eldest daughter, Levada dedicated much of her childhood to helping her mother raise, feed, clothe, and look after her many younger siblings. From these early experiences, she cultivated a lifelong talent for finding abundance and joy in the face of want and adversity. Laughing, singing, dancing at home as much as at parties and reunions, Levada filled the world with life. With her winning spirit and warmth, none who met her could resist loving her. Beneath it all she carried the pain of losing her first child to crib death, her daughter of scarcely three months from her first marriage, Robin. She later met and in 1965 married Alan Joseph Pope. Her six surviving children are from this 23-year marriage. Early in their life together, they moved their young family from a precarious future in Chicago away to the remote woods and hills of northern Wisconsin. Out of a weed-choked two-acre parcel they created a small oasis with fruit trees, flower beds, lush lawns, and a vegetable garden that Levada tended until it abounded with foods of all kinds. Her garden fed the family all through the growing season and from it she canned, pickled, jellied, and preserved a wealth of winter stores. From the tiny ramshackle farmhouse, they made a home filled with warmth and the aromas of Levada’s baking and Southern cooking. The family survived two house fires in the winter of 1979, and by fate or good fortune Levada ushered the children to safety each time. The trauma of losing in the second fire all that had been salvaged from the first was tempered only by the blessing of having passed through fire without lasting hurt to any of the family. She loved '50s rock-and-roll and old country music—Patsy Cline, Fats Domino, Elvis Presley. She would often say that what saddened her the most when Elvis died was that the poor man had never had the chance to meet her. In 1980, Levada discovered her talent for the stage and began what would become a brilliant career acting and directing plays with the Chequamegon Theatre Association into the mid-1990s. Across northern Wisconsin she became a celebrity, often stopped in the street by strangers delighted to meet the actress who stole the show in Oklahoma, Plaza Suite, The Gin Game, Nunsense, Kiss or Make Up, Exit the Body, My Fair Lady, Hello Dolly, and many other plays. Nothing gave Levada greater joy than bringing happiness to others. She made holidays and birthdays epic celebrations, with feasts fit for five families and Christmas trees that resembled intergalactic space vessels making first contact in the living room. A week before her death, all of her children, grandchildren, and great-grandchildren traveled from across the country and from abroad to spend the Thanksgiving holiday with her. Levada fought her way out of the thrall of illness and, for several days, returned to her former self enough to talk, joke, sing, and listen to stories from the past and the adventures of those just starting out in life. Levada was a fighter, scrapping with bullies after school in Chicago as a child, enduring the loss of her firstborn child, wresting a home and bounty out of the Wisconsin Northwoods, grappling with chronic pain and fighting cancer. She led a rich life filled with love. On December 8, 2019, halfway between midnight and the first light of daybreak, with her eldest daughter, constant companion, and dauntless advocate, Sheri at her side, in the final struggle of her life, Levada Pope, at last won her battle for lasting peace. There will be a memorial gathering at First Congregational United Church of Christ, 1018 Cedar Street, De Pere, WI 54115, on Saturday, December 14, 2019, from 2:00pm until the time of the memorial service at 3:00pm with Chaplain Brooks Darrah of Heartland Hospice officiating. Simply Cremation, Green Bay is serving the family.

The family of Levada S. Pope created this Life Tributes page to make it easy to share your memories.

Send flowers to the Pope family.