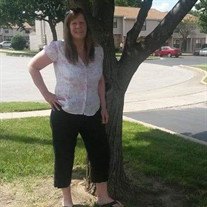 Elizabeth (Lesa) Thyrion June 12, 1958 - November 16, 2019 Lesa spirit was set free on Saturday, November 16th 2019. She was born June 12. 1958 to Elizabeth (Liz) Voel-pel and Fred Hughes. Liz later married Paul Rutherford and they expanded their family to include half siblings and step siblings and moved to Rolling Meadows and later to Elgin Illinois. Lesa met and married Ronnie Lilly and she had her first son, Jason Lilly. Lesa moved to Green Bay, Wisconsin in the early 80’s and met Tim Vincent and she had her second son, Dustin Vincent. Later, Lesa met and married Raymond Thyrion and she had her daughter, Jessica Thyrion. Lesa later moved to Springfield Missouri where she raised Dustin and Jessica. Lesa returned to Green Bay, Wisconsin 3 year ago. Lesa was a hell raiser, a rule breaker, and a straight shooter. She was a survivor, a fighter, a lover, and an independent spirit. She was an avid reader and a spirited communicator. Lesa is survived by her children, Jason (aimee) Lilly, Dustin Vincent, and Jessica Stray. Her grandchildren include Trenton, Trista, Trinity, Truessa, Shaya, Avery, one on the way, one great grandchild, Tyger. There will be a celebration of life held at the Mauthe Center, 2418 Leon Bond Dr, Green Bay, WI 54311 on Saturday, November 23, 2019 at 3 pm.

The family of Lesa Thyrion created this Life Tributes page to make it easy to share your memories.

Send flowers to the Thyrion family.