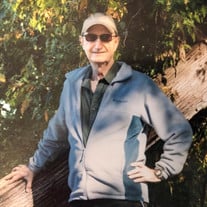 Lawrence (Larry) A. Burbey, Jr., loving husband, father, grandfather, great-grandfather, brother and uncle passed away Saturday, May 30th at home. He was a graduate of West High School in Green Bay, the class of 1958. He served in the U.S. Navy after high school from 1958-1960 when he was honorably discharged after four years of reserve service. He was married to Susan Devroy on October 5, 1963. He spent the majority of his career as a broadcast engineer, working at Channel 5 and then at Channel 26 as chief engineer. He was also a part owner at United Security. Larry was a member of the QRZ Ham Radio group where he enjoyed talking with all his Ham buddies. He enjoyed photography, camping up north, working on his computer and aviation. Larry was also a lover of history, especially the Civil War and had a wealth of knowledge on many different subjects. If there was some small fact you needed information about, Larry usually had the answer. But Larry was probably most famous for his corny, silly jokes that he made up on the fly and shared with anyone within earshot. Larry is survived by his wife of 57 years, Susan (Devroy) Burbey, his two children Lisa (Mark) Nehs of Oconomowoc, WI and Chad (Kelly) Burbey of Beaverton, OR, eight grandchildren, Michael, Devin, Josh, David, Nathan, Alex, Mason and Kyle, five greatgrandchildren, Bella Carson, Nova, Luna, and Svennin, his sister Mary (Burbey) Olson of DePere, sister-in-laws Sandra Markell, Diane Millar of Green Bay and many nieces and nephews. He was preceded in death by his father Lawrence Burbey, Sr. and his mother Katherine Kay Burbey, and brother-in-laws Ronald Markell and Dennis Millar. A memorial service is being held at St. Mary’s Catholic Church in DePere on Saturday, August 8th. Visitation will be from 10-11, with a service to follow.

Lawrence (Larry) A. Burbey, Jr., loving husband, father, grandfather, great-grandfather, brother and uncle passed away Saturday, May 30th at home. He was a graduate of West High School in Green Bay, the class of 1958. He served in the U.S.... View Obituary & Service Information

The family of Lawrence (Larry) A. Burbey Jr. created this Life Tributes page to make it easy to share your memories.

Send flowers to the Burbey family.