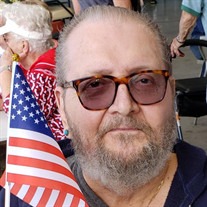 Larry Wayne Hill Sr. (77) (U.S. Navy) Life Partner of Howard Pinch. Son of Mabel (Al) & Kenneth (Margaret), born November 14, 1943, passed away on March 26, 2021 after battling IPF & Emphysema. He is survived by four children: Lisa Knapp (Corey), Rose Hill (Larry), Larry Hill Jr. (Angie), Eric Hill (Jenny) (Jean), Grandchildren and Great Grandchildren, Two Half Brothers: Robin Herbst (Linda) & Mark Herbst. He also leaves behind extended family and much loved friends. He was preceded in death by Howard and his parents. A big Thank You to a very good friend Dennis, who visited him often. Big Thank Yous also to New Perspectives Team and the Unity Hospice Team for all the wonderful care and kindness. You are Beautiful People! Thank You to the V.A. for the wonderful care and the V.A. DAV for the many rides. He had the honor of flying high in a Boeing Stearman Biplane for a Dream Flight via the Ageless Aviation Dream Foundation in 2019 in their 8-City Dedication Tour which was so memorable to him. The organization is run by volunteers only. Thank you so much to them. "In the end, we all become stories." (Nicole Spector) Our dad was a U.S. Navy Veteran and a Chicago North Western (CN&W) Railroad Man with a quirky and fun sense of humor, who in his early years loved to read, "Anything I could get my hands on," he would say. He was also a talented artist, who in his spare time loved to draw. He created many floral arrangements and he had a talent for great decorating. People watching was his favorite hobby thru-out life. He was fascinated by humans. He also loved animals. He once studied to be a Baptist minister. He loved drama and he was a mischief maker. He liked to fool people and collected various religious figures just to keep you guessing which religion he was, when all along having a knowledge of a forgiving and loving God. Later in life he took up the talent of loom knitting, consistently re-doing many projects until they met his standards of perfection. He was also obsessed with horror movies, crime shows and documentaries to his last day. Many a care team member at New Perspectives and Unity Hospice were delighted in the fact that when they entered his apartment they would be greeted with an unusual remark or a funny response to questions, as he loved to make people laugh, and they loved the different choice of programming that made them want to sit and stay awhile or run the other way. He had a passion for jewelry, loving to show off his treasures to everyone and he had his own true style. We were very lucky to have had the time with him that we did and he is already so dearly missed. See you again daddy... Per Larry's request no services will be held.

The family of Larry Wayne Hill Sr. created this Life Tributes page to make it easy to share your memories.

Send flowers to the Hill family.