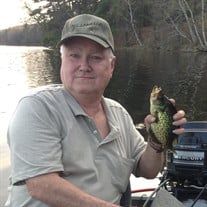 Kenneth "Ken" James Karcz, 66, Green Bay, left this world on his terms on August 5, 2019, followed by a long illness. He was born on Sept 9, 1952 in Green Bay WI, to Florian and Florence (Miller) Karcz. He was a 1970 Graduate from West De Pere High School. Up until his health no longer allowed, he had a love for his boat and fishing. Ken was an avid bowler in his younger years and even had the nickname “Pogo”. He enjoyed camping, hunting and the outdoors. Ken worked at HC Miller, Evenflo, eventually to retire with Tufco Technologies. Ken is survived by his children: Jason (April) Karcz, Adam (Katie) Karcz, Sara Karcz, and Nicholas Karcz; grandchildren: Austin Ray, Jack Gregory, Anna Rose, Rebecca Lynn, Adam James, Alec David, and Austin William; sister: Carol (Kevin) VandeYacht; nieces and nephews: Chad (Annette)VandeYacht, Kristine (Bryan) Kuchta, Dawn (Daniel) Gumieny, Dean Peters (who was also Ken's Godfather) and several great nieces and nephews. Ken was preceded in death by his parents, and one sister Barbara Rusch. There will be a private graveside service at a later date at BVM Assumption Cemetery in Pulaski, WI. We would like to thank Angie at Bellin Hospital Cardiac Unit for her kindness and comfort his last few days.

The family of Kenneth Karcz created this Life Tributes page to make it easy to share your memories.

Send flowers to the Karcz family.