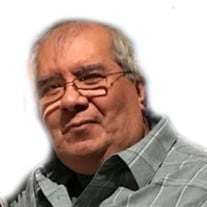 On Tuesday, November 17th, 2020, Julio Clemente Gonzalez, 71, surrounded by his devoted children, peacefully left this earthly realm to forever be with his Lord and Savior, Jesus Christ. To those who knew him, both family and friend, he will always be remembered for being a kind and honest, generous man, and to the many people whose lives he truly touched, he will be irreplaceable. Born in Green Bay at Bellin Hospital on Feb. 2, 1949, Julio developed a love of music as a teen that would continue to grow throughout his entire life, eventually culminating in one of his favorite pastimes in his later years: playing bass guitar as a member of his church's worship team. It was also these same, early high school years when he met his future soulmate, Pamela, who, only three short years later, would become his partner in life when they married on December 16th, 1967, dedicating the rest of their lives to each other. Five decades later and having raised four children with his loving wife, Julio leaves behind him a strong family legacy that will endure for generation upon generation. Julio cherished spending time fishing with his children and grandchildren, and watching his favorite teams the Milwaukee Brewers and Green Bay Packers play. He enjoyed the sport of archery for much of his life, and later became known for the customized arrows and bowstrings he created, in which archers from all over the state would seek him out to obtain their own special sets. He also loved getting together with his boys for special MMA fight nights, where so many fond memories were created for all of them. And it should be added one of his all-time favorite comedy films was the same as his birthday, Groundhog Day. Julio was preceded in death by his father, Julian, and his mother, Isidra (Pena), his sister, Maggie, and brother Enrique "Pepe" Cadena, Jr. He is survived by his wife, Pamela (Roe), his four children Christopher, Angela, Steven and Jess (Amy), and twelve grandchildren, whom he loved and adored: Sarah Kate (Dacia), Taylor, Tannor, Lauren, Treyden, Christian, Caden, Sienna, Eliana, Elijah, Eliseo and Zachary; he also is survived by his sisters Irene and Marcie, and his brothers Juan and Daniel. Private family services will be held.

On Tuesday, November 17th, 2020, Julio Clemente Gonzalez, 71, surrounded by his devoted children, peacefully left this earthly realm to forever be with his Lord and Savior, Jesus Christ. To those who knew him, both family and friend, he will... View Obituary & Service Information

The family of Julio "Choto" Gonzalez created this Life Tributes page to make it easy to share your memories.

Send flowers to the Gonzalez family.