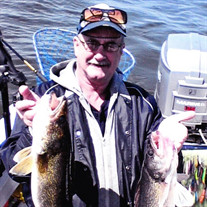 Jon Wayne Kautnen, 69, of Green Bay, passed away on March 8th after complications of Congestive Heart Failure. Jon was born on Feb 7, 1952 to Wayne and Ruth Kautiainen in Crystal Falls, MI. His parents always taught him to be good to people and help them out when they were in need because they did the same for others. He was brought into the Lutheran Faith. His hobbies included hunting, fishing, and meeting with people to enjoy their company. He was also a prankster with a great sense of humor. He loved his dog, Star, who he grew up with. Star lived on for 19 years of friendship with him. After graduating from Forest Park High School, he went on to serve in the US Navy from March 1971-March 1975, where he was honorably discharged. During his time in the Navy, he served as an aircraft mechanic troubleshooter on the carriers Saratoga and Independence. He did two Mediterranean Sea Tours and met a lot of great people, but, he sure did love the USA! After serving in the military, he transitioned his career to carpentry. He had experience working with Hillcrest Homes, P.R.K, and Manufactured Housing Specialists. Work was more of a hobby for him. He loved to use his skills to help his friends and family out. Jon was always a good man and always willing to go out of his way to do anything for them! In 1979, he met Carrie Williams. They married and went on to have two children, Chad and Melissa Kautnen. After retiring, Jon spent his time with friends and family. He absolutely adored his seven grandchildren; Makenna, Kailee, Daltin J, Grayson, Ariana, Camden, and Kailyn. Jon was preceded in death by his Grandparents, Eric Kautiainen, Arthur and Marie Isaacson, Parents, Wayne and Ruth Kautiainen, siblings, Ellen and Ken, and his best friend, Star. He is survived by Carrie, Melissa, Chad and Amanda, his grandchildren, best friends Shu and Joe, and all of their close relatives and friends. A message from Jon, "I will miss you Carrie, Chad, and Melissa. God bless you and your family. This is Jon Kautnen signing off from the great beyond!"

Jon Wayne Kautnen, 69, of Green Bay, passed away on March 8th after complications of Congestive Heart Failure. Jon was born on Feb 7, 1952 to Wayne and Ruth Kautiainen in Crystal Falls, MI. His parents always taught him to be good to people... View Obituary & Service Information

The family of Jon Kautnen created this Life Tributes page to make it easy to share your memories.

Send flowers to the Kautnen family.