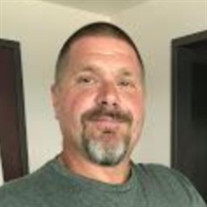 On March 27, 2020 John C Kostichka “JR” of Forestville, passed away unexpectedly at the age of 56. John was born February 20Th, 1964 in Algoma WI and graduated from Southern Door High School in 1982. His wife Vicky was the love of his life, his best friend and partner in crime for 25 years. Together they raised their 3 children, Shelby, Ryan and Kyle and built a life full of love and laughter. John was an avid hunter, fisherman and was always willing to lend a helping hand. He was an irreplaceable member of the Black Ash Gun Club where he loved shooting trap and serving his delicious soups. He’ll be remembered for his selflessness, his quick wit, and his beautifully manicured lawn. John was preceded in death by his mother Janet Kostichka and father John Kostichka. He is survived by his wife Vicky, his 3 children, Shelby (Trevor) Loucks, Ryan (Ashley) Vokral and Kyle (finance’ Nicole Koss) Holmes along with his 3 grandchildren Lauren, Bentley and Josie. He is further survived by his 4 sisters Amy Parkos, Lori Virtues, Jodie Naze and Jill Kostichka along with their spouses and partners; Sister-in-laws Brenda Bonk, Lynn Boucher, Wendy Maple, brother-in-law Jim Holmes and their spouses. Also included are many aunts, uncles, nieces, nephews and lifelong friends. A “Celebration of Life” will take place at The Black Ash Gun Club at a later date (TBD). Family and friends will be notified when a date is set. Condolences and contributions, if desired, can be sent to John’s Family at PO Box 51 Forestville WI 54213.

The family of John Kostichka created this Life Tributes page to make it easy to share your memories.

Send flowers to the Kostichka family.