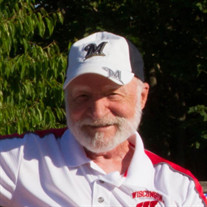 John Gore, 77, passed peacefully at his home on February 7, 2022, , after a short battle with cancer, with his loving wife, Sandie by his side. John was born on October 11, 1944 to John and Anita Gore in Green Bay, WI. John served in the Army for 3 years, as well as worked for the Navy for 10 years. For the remainder of his working years, he worked as a record custodian and HIPPA administrator at Curative Connections. John and his wife Sandie retired 6 years ago and spent every minute enjoying their retirement and their time together. John was an extremely talented artist. He enjoyed spending his time painting pictures for his home, family and friends, writing and singing songs, and playing the guitar. He was such a giving person, donating much of his time lighting up rooms playing guitar and singing at places such as Curative Connections, Patient Pines, and the farmer’s market on Military. He also played a huge role helping his wife volunteering for the Mit Liebe German Shephard Dog Rescue of Green Bay. John was a simple man with a huge heart who will be dearly missed by his and Sandie’s many friends and family. He was survived by his wife of 37 years, Sandie; his three children Gina, Kelly, and Ryan; five granddaughters Erin, Sarah, Marta, Taylor, Jamie; one Great-Grandson Westin. John was especially close with his brother and sister-in-law Rick and Donette Phillips; his nephew and niece, Justin (Tiffany) Phillips and Toni (Ebisa) Phillips; Justin and Tiffany’s four children who loved their Great Uncle John very much; Brandon, Evelyn, Carter Mae, and Justin Jr. He was survived by his siblings; Randy (Elaine) Gore, Tim Gore, Jackie De Breau, and their children. In lieu of flowers, a memorial fund has been set up in John’s honor and the donations can be sent to his wife, Sandie Gore, at PO Box 376 Suamico, WI 54173. Per John’s wishes, there will be no funeral, and instead, a celebration of his life will be held early summer 2022.

John Gore, 77, passed peacefully at his home on February 7, 2022, , after a short battle with cancer, with his loving wife, Sandie by his side. John was born on October 11, 1944 to John and Anita Gore in Green Bay, WI. John served in the Army... View Obituary & Service Information

The family of John E. Gore created this Life Tributes page to make it easy to share your memories.

Send flowers to the Gore family.