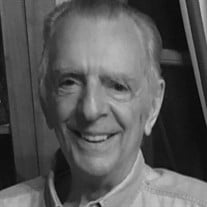 John D.L. Droege, 88, Denmark, passed away peacefully at home surrounded by his loving family on June 14, 2021. John was born on February 14, 1933 in Granite City, Illinois to the late Charles M. and Hedy A. (Werner) Droege. He joined the Air Force and while attending a USO dance at Chanute Air Force base in Rantoul, Illinois in 1953, he met his wife of 66 years, Constance L. Wacker. They were married on September 4, 1954.   After being honorably discharged from the Air Force, John graduated from Southern Illinois University with a bachelors degree in marketing. In 1960, he was a teaching assistant while receiving his master’s degree in economics from the University of North Dakota. From there he accepted an assistant professor position and taught business and economics for three years at Gustavus Adolphus College in St. Peter, Minnesota. In 1963, he was awarded the Earhart Foundation Fellowship for the first year of study in his Ph.D. program at the University of Wisconsin-Madison. John left Madison in 1965 and moved to Green Bay to accept a position as coordinator and faculty member of the University of Wisconsin Extension Division for Northeastern Wisconsin. John was hired by Green Bay Packaging, Inc. in 1967 as assistant to the Executive Vice President. Shortly after starting he was promoted to Production Manager for the Shipping Container plant. He thrived in this position as he always had a special way with people. One of the things he loved most was connecting on a personal level with all the plant workers. John was promoted to Vice President of Industrial Relations in 1982. In total, he worked for Green Bay Packaging, Inc. for 31 years before retiring as Vice President of Human Resources in 1998. John always found a way to give back at work and in the community. He served as Chairman of the Corrugated Containers Division of the Technical Association of the Pulp and Paper Industry (TAPPI). He also served on the board of directors for the Curative Workshop of Brown County. John was a longtime member of Atonement Lutheran Church and served on the church council. He was a passionate and longtime supporter of the Leukemia & Lymphoma Society and the Salvation Army. John loved to go antiquing and refinishing the pieces he would find. He took pride when a family came to buy one of his masterpieces. He loved to travel with friends, especially to Las Vegas where he claimed there wouldn’t be any inheritance left after he got done at the slot machines. John and Connie loved to entertain and when they moved to Denmark in 1973 they threw many parties for family, work friends, church friends and even hosted a wedding for their granddaughter Jackie. He loved the outdoors, especially hunting and fishing. One of his favorite trips was to South Dakota with his son, Brian, to pheasant hunt. In the early 1970s he owned a steel hulled fishing boat with his brother Charlie called the SeaJay which they kept in Algoma. Since neither brother had any experience piloting, it made for some white knuckles and bruised docks on many return trips. John is survived by his wife, Constance L. (Wacker) and their four children, Brian (Nancy), Kathy, Pam and Trisha (Rob) Mulligan; his eight grandchildren: Aaron, Ben, Jackie (Bob) Romuald, Jon (fiancé Amanda), Alisha, Jenny, Kylee and Maxine and great grandson, Trenton; his sister-in-laws, Joan Droege and Jacqueline (Wacker) Racey; nieces and nephews. He was preceded in death by his parents, his father and mother-in-law, Oscar and Inez Wacker, his son, John Tod, his brother, Charlie Droege, his brother-in-law, Ken Racey and one nephew, Chip Droege Private family services will be held. If desired, memorials may be made to the Leukemia & Lymphoma Society or Salvation Army. A special thank you goes out to the staff at Aurora Health at Home (hospice); Leah, Mary, Stefanie,Tracy, Alicen, and Brianna and Good People LLC; Albert. Your compassion and professionalism during this difficult time will always be remembered.

John D.L. Droege, 88, Denmark, passed away peacefully at home surrounded by his loving family on June 14, 2021. John was born on February 14, 1933 in Granite City, Illinois to the late Charles M. and Hedy A. (Werner) Droege. He joined the Air... View Obituary & Service Information

The family of John D. L. Droege created this Life Tributes page to make it easy to share your memories.

Send flowers to the Droege family.