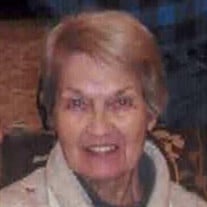 Joan Albrecht, 82, Hobart/Crivitz, passed away on March 31, 2022, after a valiant battle with dementia/alzheimer's disease. Joan was born on May 31, 1939, to the late Earl and Dorothy (Bell) Price in Calhoun, MO. She was raised by her grandmother Minnie (Frye) Price and moved with her to Milwaukee, WI, in her teens. After graduating high school in 1957, she met her future husband, Leonard Albrecht, through mutual friends. They were married on June 27, 1959, and began a 60 year journey together until his passing in 2020. They began life together in Menominee Falls, WI. Traveling on weekends to their cottage on Long Lake in Wausaukee, where they owned half the cottages on the lake (there were only 2 at the time). Deciding up north life was what they wanted, they bought a small farm in Coleman. Joan loved taking care of all the different animals they raised and named every single one. In 1992, they retired and moved to Crivitz where she enjoyed gardening, feeding the critters, as she called them, and going on road trips all over the U.S., including a month long trek to Alaska in 2004. She also took the time to get her real estate license and worked for Near North Realty for several years. She and her husband started a wood carving club in Crivitz to share their carving, wood burning and painting talents with many other people, most of whom became dear friends over the years. Joan is survived by 2 children, Len (Annette) Albrecht of Superior, WI; and Beth Albrecht of Green Bay; 3 grandchildren: Tyler (Mavis) Albrecht, Jake (Paige) Albrecht, and Catie (Gabe) Gelhaus; 1 great grandchild, Lawson Albrecht; 1 brother, Gene Price of Yantis, TX; 3 nephews; and many cousins. Joan was preceded in death by her husband, Len; her parents and grandmother; and in-laws, Leonard and Emily Albrecht and Dorothy and Maston Zuber. Special thanks to all the caregivers at Emerald Bay Memory Care and Heartland Hospice for the care they gave mom. A private family gathering is planned.

Joan Albrecht, 82, Hobart/Crivitz, passed away on March 31, 2022, after a valiant battle with dementia/alzheimer's disease. Joan was born on May 31, 1939, to the late Earl and Dorothy (Bell) Price in Calhoun, MO. She was raised by her grandmother... View Obituary & Service Information

The family of Joan Albrecht created this Life Tributes page to make it easy to share your memories.

Send flowers to the Albrecht family.