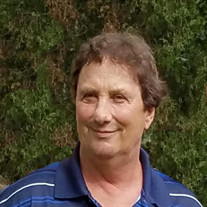 On March 19, 2020, we lost our brother, brother-in-law, uncle and friend Jim “Ish” Herman. He was born on October 29, 1950, to Warren and Elsie Herman. Jim took his role of big brother to heart and was always there as family protector and guide. His love of fishing, hunting, and golf were well known and he used those opportunities to bond with his brothers, nephews, and friends. Jim graduated from West High in 1969 and then joined the Army. He served from 1969-1972 including two tours in Viet Nam. He worked for Morning Glory for many years until his retirement in October, 2012. Jim enjoyed his monthly breakfasts with old friends and especially the 5th Street boys. And he will always be fondly remembered by his nephews, nieces, and their families as “Uncle Ish”. Jim dealt with the effects of agent orange exposure for many years and now it has beaten him. He was able to spend his last few days lovingly cared for by his sister, Judy and her husband, Bob. Judy and Bob opened their home to family and friends so many were able to visit Jim one last time to say their good-byes. God bless them for doing that! Jim is survived by 5 brothers and 1 sister: twin brother, Jerry (Luanne) Herman, Wausaukee, Jeff (Susie) Herman, Green Bay, sister, Judy (Bob) Schaetz, De Pere, Joe (Debby) Herman, Bob Herman, and Doug (Chris) Herman, all of Green Bay. Also survived by 8 nephews, 5 nieces, good friend and hunting and fishing buddy, Ken “Bulldog” Francois, aunts and uncles, Junie and Claudette Renard, Joanne Herman, Gary and Mary Renard, Helen Herwald, and many cousins and friends. He was preceded in death by his parents, Warren and Elsie Herman, aunts and uncles: Lloyd Herman, Harold and Ruth King, and Rudy Herwald. Visitation at Redeemer Lutheran Church, 210 S. Oneida Street, Green Bay, Saturday, July 18,2020 from 10am until the time of the service. Memorial service 12 Noon at the church with Pastor Paul Pett officiating followed with full military honors. Due to the current health situation, the family requests that everyone wear a mask and observe social distancing guidelines.

The family of Jim "Ish" Herman created this Life Tributes page to make it easy to share your memories.

Send flowers to the Herman family.