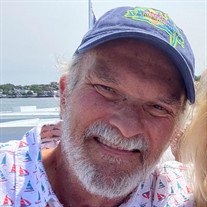 Jeffrey Lee Zehr, 69, died peacefully at home surrounded by loved ones on August, 24, 2021. He was diagnosed with pancreatic cancer in September 2020, and while the past eleven months have not been easy, Jeff maintained a positive attitude and good humor throughout that time. Jeff was born on October 3, 1951 in Peoria, Illinois to Byron and Pat Zehr. Byron and Pat were incredible parents who opened their hearts and home to many people. Jeff was the oldest of 11 kids, which gave him some skills that he would find useful later in life. One skill he perfected that came in handy when he had his own family was his use of time management. Jeff was the family timekeeper, always calling out warnings such as, “We’re leaving in 10 minutes…..we’re leaving in 3 minutes.” If you weren’t early, you were late. Another skill Jeff perfected was the ability to use selective hearing. With teenage girls in the house and boys coming and going and a wife who likes to talk a lot, Jeff could often be found in the midst of the chaos quietly reading one of his historical fiction books that he loved. He sometimes claimed poor hearing, but many of us suspected that he really just had the incredible gift of tuning everyone out. Jeff traveled for work throughout his life, but his favorite times to travel were with his family. St. Charles, Missouri and Mackinac Island were two of his favorite destinations. The slow pace of life and quiet settings were exactly where he wanted to be. During these times Jeff would impart wisdom on his family members. One bit of wisdom he clung to was that the proper pronunciation of “wolf” was “woof.” The world just said it wrong. He also was very careful when eating ice cream with pralines: you never know when you might choke on one. And his wisest advice of all was his dedication to a low-sodium diet, proclaiming, “Salt will kill!” Jeff was a kind, loving, and peaceful man. He will truly be missed by everyone who knew him. He is survived by his wife, Bev, and his children Shane (Jodi), Angel (Matt), Pete (Carla), Autumn (Dan) and Chase. He is also survived by many grandchildren, whom he loved to pieces, and one great grandson. Jeff left us with a lifetime of love and happy memories and he will be missed by us all. A Celebration of Life will be held in the spring of 2022.

Jeffrey Lee Zehr, 69, died peacefully at home surrounded by loved ones on August, 24, 2021. He was diagnosed with pancreatic cancer in September 2020, and while the past eleven months have not been easy, Jeff maintained a positive attitude and... View Obituary & Service Information

The family of Jeffrey Zehr created this Life Tributes page to make it easy to share your memories.

Send flowers to the Zehr family.