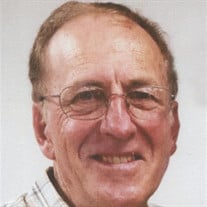 James Edward Schipper, 74, of Sturgeon Bay, passed away peacefully on Tuesday, March 19, 2019 at Parkside Village in Allouez after his courageous battle with Alzheimer’s. James was born on October 13, 1943 in Cascade, WI. James will be deeply missed by his loving wife, June; daughter, Jacqueline (Keith) Birnschein of Sturgeon Bay, grandchildren, Cody (Samantha Jo) of Roy, Utah and Savanna of Sturgeon Bay, sister, Donna (Garry) TenPas of Cascade, Sister-in-law, Linda Schipper of Cascade, and brother, William Schipper of Plymouth. He was preceded in death by his parents; Martin and Josephine Schipper; and brother, Richard Schipper. His hobbies included hunting, fishing, cross country skiing, golf and spending time with his grandchildren climbing the Peninsula State Park tower. James also served in the United States Navy from 1961-1964 on the Ashland in the Mediteranian and was a member of St. Peter’s Lutheran Church in Sturgeon Bay. As per James and his family, wishes for a private service will be held at a future date. “Our family would like to extend a heartfelt thanks to the entire staff at Allouez Parkside Village #2 and Heartland Hospice of Green Bay for their special care of Jim at his time of need.”

James Edward Schipper, 74, of Sturgeon Bay, passed away peacefully on Tuesday, March 19, 2019 at Parkside Village in Allouez after his courageous battle with Alzheimer&#8217;s. James was born on October 13, 1943 in Cascade, WI. James will be... View Obituary & Service Information

The family of James Edward Schipper created this Life Tributes page to make it easy to share your memories.

Send flowers to the Schipper family.